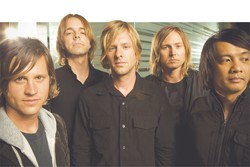 
Though it’s not the traditional choice for most rock stars, Switchfoot (right) and Third Day are strengthening communities throughout the nation with the Music Builds tour. Habitat for Humanity affiliates will be the beneficiaries of a portion of the funds raised during the tour, and the bands themselves will pick up hammers at build sites along the way. Both Switchfoot and Third Day have garnered critical acclaim and tons of Christian and alternative rock airplay largely due to their relentless touring schedules, but still find time to get involved in various humanitarian efforts such as raising money for Hurricane Katrina and Rita victims, Debt AIDS Trade Africa, the Blood: Water Mission, Invisible Children, and more. Robert Randolph & The Family Band, Jars of Clay, and Red also rock the stage. $25-$125, 6pm, Verizon Wireless Amphitheater, 16765 Lookout Rd., musicbuildstour.com.