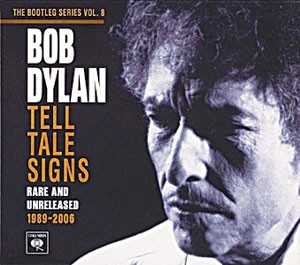 
The last time Bob Dylan collaborated with Grateful Dead lyricist Robert Hunter, it was 1987, and the needle on Dylan’s inspiration meter was on empty. So it can’t be a good sign that Dylan — the most celebrated lyricist of the rock era — felt the need to enlist Hunter’s help on all but one song here.

That being said, Dylan has been in such a 78-rpm groove over the last 12 years, and he’s so in tune with his grizzled, down-on-his-luck Rhett Butler persona, he can make pleasurable music even when his muse is on cruise control — which is the case with much of this album.

The true star of Together is Los Lobos virtuoso David Hidalgo, whose fluid accordion turns “This Dream of You” into a credible cantina tearjerker, and helps you forget that the meandering “If You Ever Go to Houston” is a naked pinch from “Midnight Special.”

Thankfully, Dylan rouses himself for the last two songs: name-checking Billy Joe Shaver and James Joyce in a single line, and finger-snapping his way to Armageddon while sarcastically telling us “it’s all good.” These moments remind us that even when Dylan is working by rote, he’s still a pretty weird guy.