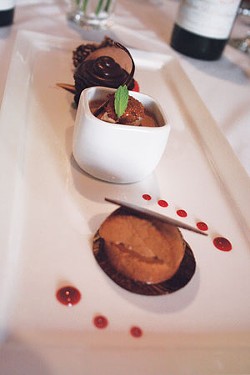 
Las Canarias would be one of the city’s loveliest dining spaces even without its perch on the River Walk. But toss in a table at the windows overlooking el rio, season with strains of classic guitar by el Curro, and they have you before hello. The food that follows is appealing, too, which is good, because this is where a love-at-first-sight relationship truly gets tested.

Our relationship began with a quivering and delicate amuse-bouche of passion-fruit gelée scented with vanilla — a perfect leave-’em-wanting-more overture. A basket of two different breads with three flavored spreads was next on the scene. It was almost too much too soon, but the truffle-perfumed aioli and the earthy tapenade easily insinuated their way into the early evening. With the arrival of the salmon rillettes, coyly presented in a lidded Mason jar, it was beginning to be a question of “your place or mine.”

On the River Walk, the crowds surged by oblivious to the encounter unfolding within.

Glasses of a Louis Jadot Macon Village and Tieffenbrunner’s minerally Pinot Grigio delle Venezie were amiable companions to the appealingly herbal minced salmon. (Chef John Brand prefers farm-raised salmon from Tasmania — at least at this time of year, since the pens are periodically moved.) We expected the wines to also go well with what the staff has begun to call tuna “tacos,” but it was here that the first sign of stormy waters appeared. The cubed, raw tuna was nicely seasoned, but the “shells” of jícama, crumb-coated and fried in the familiar “U” shape, were tough and tasted nothing of the crisp tuber we know and love with a little lime and cayenne.

But the love boat sailed again with the arrival of an earthy bowl of sunchoke velouté. Deep and roasty, the plush soup was garnished with unusually flavorful chopped shrimp and celery-root “pesto.”

There is no seduction on a budget to be had on the Las Canarias wine list; it starts in the $40 range, and quickly rises to the $100 mark and beyond with little in between. Northern California is well-represented, alternative whites and reds are not, but a $75 2005 Louis Jadot Pommard seemed worth the investment. It needed to work with both duck and veal, and indeed it did.

The hunk o’ veal that appeared was substantial and honest tasting without being in any way exceptional. We asked for salt, normally a blasphemous act. But the accompanying potatoes sautéed in duck fat defined sybaritic.

The menu described the duck dish as a confit-stuffed breast, but coaxing is surely required to get it into its spectacular, tubular form, served sliced atop an orange-accented bed of kale with white Peruvian beans, ribboned baby squash, and more. Yet, again, the impressive vegetable sidekick almost outshone the main event. And again, salt was needed, but the damage, such as it was, had been done to the duck breast, which was slightly overcooked.

The crowds continued to stream past the window as chords cascaded from the strings of El Curro’s guitar. It was time for a breather. We decided on the comfort of a cheese plate and a shared glass of the cheapest Port on the list. (Unless trying mightily to impress a date, never fear ordering the cheapest wine; it’s often where the items of real interest are.) As it had been all evening, the service was suave, the presentation impeccable. But the cheeses failed to impress. Perhaps it was a question of poor selection on our part — though the Cypress Grove sheep, the cocoa-rinded Wisconsin, and the Chimay Grand Crû from Belgium had sounded promising. Maybe it was serving temperature. (Too cold.) And maybe the thrill was simply beginning to fade. A second date? Sure. But let’s set new parameters.

Maybe we should have started with lunch at one of Las Canarias’ outdoor tables just above the River Walk. (Oops. Here comes Ms. Canyon Cleavage again. She shouldn’t be wearing those shorts, either.) Less financial pressure at lunch from the menu, too, which has recently been retooled to read Small Plates and Large Plates. We ignored the distinction and paired willy-nilly, starting with lamb meatballs and a shared bowl of tomato-watermelon gazpacho. Loved the soup despite generally preferring a chunkier approach; the watermelon mellowed out the acidity of the tomato and added a natural sweetness, a drizzle of oil is never remiss, and pine nuts added, well, nuttiness.

And who’d have though that rosemary-skewered lamb meatballs would be so complex. So engrossed were we in prizing out enigmatic flavors (citrus zest, aromatic herbs …) that we almost failed to notice that the advertised grilled feta hadn’t shown up. We did agree that the chickpea and avocado relish that bolstered the balls might have been a little coarser in order to give the creamy avocado more influence, but the flavors were fine.

Shrimp sautéed in a delicate nut crust arrived for the second course. Just two of them were bedded atop a sweet-potato purée — strange bedfellows, but individually very good. With the appearance of the braised-beef empanadas, the affair was beginning to reach a mellow, comfortable phase. We were willing to excuse the modest dryness of the well-seasoned beef stuffing, the ever-so-slight chewiness of the empanada’s ruffled margins— in part because the rusty and robust romesco sauce was so appealing and complementary.

Craftsmanship was front and center at dessert time in a four-part plate showcasing different crûs of Valrhona chocolate. All but the gelato could have been closer to room temperature for maximum impact, but the distinctive flavors ranged from earthy to fruity in the mousse, the pot de crème, and the almost dauntingly dense cupcake. The best impressions are the last impressions; there may be hope for a long-term relationship here after all.