Time out of place 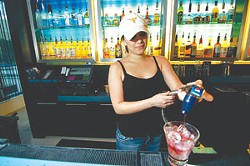 
Dive bars are like gritty community theater, with cheap production design, over-acting, and occasional soliloquies of dysfunction. In contrast, the modern hotel bar is like a slick Hollywood film — extravagant production design, understated performances, with style favored over substance.

Enter the Aloft Hotel (of the boutique W Hotel family). Our first few steps into Aloft’s bar felt like walking onto a movie set, not just because of the décor (something between the neo-modernity of West Hollywood and an Ikea showroom) but because of the fashion shoot occurring in the middle of Wxyz’s lounge area. Granted, the woman was in a wedding dress, but the fact that she chose the bar for her wedding photos only made the moment seem less real. Talking to the bartender, we got a sense this was not something the hotel was involved with. We wondered what movie title would describe her upcoming ceremony — My Small Skinny Hipster Wedding, perhaps?

Behind the bar, the bottles of liquor were presented dramatically on a lighted wall. While considering the selection we realized Wxyz is a lobby bar, but the swimming pool is just in view outside the window, which makes the vibe more casual than we would have thought considering all the meticulous details. The Wxyz offers a decent range of liquor options, even if they do give too much of their space to vodka — but then again, who doesn’t? A rare bottle of Pimm’s made me think the bartender could mix up something unusual, but he didn’t know any Pimm’s drinks.

We didn’t do much better. Bar Tab tried to order what we thought was an Old Cuban, but we forgot the ingredients and went blindly along with something involving gin, soda, simple syrup, lime juice, and a few sprigs of mint. Yeah, not really sure what to call that, but it’s basically a Gin Fizz with mint, and to be honest, it’s not that bad. (For a true Old Cuban, replace the gin with a gold rum and add some bitters.)

Wxyz is like an adult Choose Your Own Adventure story: they have pool tables, a few old-school games, and a large patio outside to enjoy the fresh air. The bar itself is a bit impersonal and is more of a launching pad from which to find entertainment somewhere else in the lobby/lounge. We went outside by the pool and stood in rapt attention over a small volcanic fire pit. At night this would probably make more sense.  Nonetheless, we stood over it like cavemen in a chic existential quandary. Questions arose: Why isn’t this hotel downtown? Who is their target audience? What the hell drink did I order?

Aloft is an airport hotel, so perhaps they’re trying to create a niche for themselves on the North Side and avoid the hotel conurbation downtown. That’s probably a wise and economical move, however sad it is to agree with any further yo-yoing of the city.  Whereas the Valencia downtown has the Majestic Theatre next door for guests’ entertainment, Aloft will soon have an adjacent Alamo Drafthouse. For cool affordability Aloft and Wxyz have made a bold but unlikely move in SA. Despite our few minor quibbles, we like it and think it will be a hit.