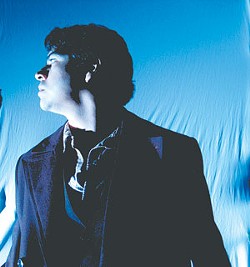 
The year? 2068. The place? San Antonio. The mission? Figure out what is up with some ridiculously confusing twins while consuming copious amounts of liquor and having one’s memory erased. Sound impossible? It sort of is.

The Case of the Neon Twins at Jump-Start Performance Co. is a film-noir style romp through a bleak, futuristic San Antonio, as seen through the eyes of a clumsy alcoholic detective, Franco, played by an appropriately melodramatic and befuddled Joel Settles. Franco has been commissioned by Alexis, a mysterious yet alluring young woman, to find her twin sister, who is apparently missing. Along the way, Franco meets a strange cast of characters, including Alexia, a stripper who dresses in neon to perform, and Mijo, a gangsta technology buff. Two ditzy ladies in the sky command an armada of robot roaches and monitor the happenings down in S.A. through Global Tech, a company that has turned San Antonio into an industrial hellhole.

The play was written by San Antonians Daniel Jackson and Billy Muñoz. Muñoz explains that the concept for the story came from his love of comic books and his own frustration at not being able to “crack that case,” aka a tricky script. A detective must have seemed the most likely partner in frustration, though it appears that Jackson and Muñoz are better at their jobs than Franco.

Franco, like any good detective, has a drinking problem, as well as the unfortunate tendency to forget people and events from his past. The other two live characters, Alexia and Alexis, are femme-fatale types, who are more clued-in than the bumbling detective.

The rest of the cast of characters appear only on projection screens. Mijo, excellently portrayed by Ray Bo, is accessed through futuristic phone-booth type structures, which allow him to video chat with Franco. The bartenders, one of whom is voiced hilariously by Dino Foxx, appear as robotic servers with human faces. Even the ladies in the sky are only seen by the audience on a projection screen that is apparently a window into their craft.

The story is largely confusing, but the truly
innovative aspect of the show is the use of technology as another performer. For the
actors who appear onstage, it must be like working with a small child or a dog — all three are prone to randomly do their own thing rather than stick to the directions they’re given. The projections freeze from time to time, or are slow to load, but at least they never pee on the set.

Muñoz explained that Jump-Start does not have ample storage space for sets, so the projection screens were a good way to get around that limitation. Way to be economical and forward-thinking, Jump-Start! With conservation-minded efforts like this, perhaps San Antonio will not turn into the desolate corporate wasteland that The Case of the Neon Twins predicts. Chicks dancing in neon body paint I can deal with, but the day that robot roaches start attacking, I’m out.