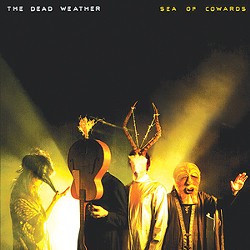 
Jack White actually found a band. Nothing against Meg, the Raconteurs,  or White Blood Cells, but the Dead Weather —  featuring the Raconteur’s Jack Lawrence on bass, Queens of the Stone Age’s Dean Ferita on guitar, White on drums, and maybe most crucially the Kills’ Alison Mosshart on vocals — is the first satisfactory answer to the question “What if Jack White learned how to share with other competent musicians?” His single sole songwriting credit, “Cut Like a Buffalo” is unmistakable if only for White’s vocal contributions, but its continuation of the futuristic blues-rock blueprint largely abandoned after Icky Thump’s title track is no standout. Single “Hang You From the Heavens” features the sort of drum-solo showboating you might expect when you give White the sticks, but its incontinent breaks are a single, arguably inessential, element. Group effort “Treat Me Like Your Mother,” which indiscriminately combines the elements of hard-rock acts from Led Zeppelin to Rage Against the Machine might be the key track, but the entire album is a savage reptile-brain stimulant best taken as a whole. For those who like their rock to actually rock, it’ll be a strong candidate for album of the year.