Street food fit for a Maharaja 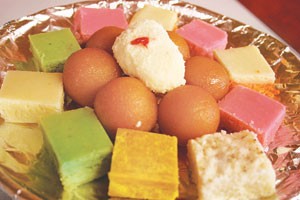 
The PR campaign for the new Cheetos Giant asks the big question: One bite or two? We’ll leave this hefty discussion to other forums, but will weigh in on another front: Once you’ve learned how to manipulate pani puri, it’s one bite for sure. Trying for two simply invites disaster.

Pani puri are near the top of the appetizer list at Maharaja Sweets, a new-ish Indian restaurant occupying the space in a soulless strip center previously filled by other Indian operations. The new owners appear to have made some efforts to efface past tenants in the form of color and tiki torches we can’t imagine will ever be lit, but you’re not going for the décor. (The fastidious won’t go for the unisex bathroom, either.)  No, it’s the Indian street food that should jump-start the evening.

The menu says the pani puri (or poori) are “eight flour wafers,” but the “wafers” are puffed up into hollow spheres about the size of a golf ball (same as the new Cheetos Giant — I’m told). They’re served with “masala water” and a chickpea, potato, onion mix that at first seems incompatible. Here’s what you do: Carefully poke a hole in the delicate sphere; shovel in some of the chickpea mix; pour into the globe as much of the spicy-herbal masala water as will fit; pop into mouth. We loved ’em.

We were also fond of the bhelpuri, a product that might call to mind a San Antonio birthright: Frito pie. Except this is much more nuanced. The starting mix consists of puffed rice, tiny broken noodles, bits of other
fried dough-like substance, maybe split chickpeas … to which chopped onion, cubes of potato, and one or more chutneys may be added. Street vendors in Mumbai have the dry ready to be transformed by the wet in front of your eyes. At Majaraja, it’s assembled in the kitchen, and though we can imagine even more exotic variations on the theme, this was already addictive.

THE SKINNY Indian street food
served in a stationary setting. The
nontraditional appetizers, spicy meat
dishes, and assorted sweets are
excellent, but the biryiani wasn’t
memorable

More conventional appetizers are also listed, but not necessarily available. The kitchen was inexplicably out of pakoras, but the samosas, stuffed with a pea and potato mixture distinguished by cumin and coriander spicing, had been deftly fried in an especially appealing crust. Sadly, the mint/coriander chutney was well past its prime and a fresher substitute was not available, but another chutney with an enigmatically fruity flavor filled the bill nicely.

Subtlety, we concluded, was not Maharaja’s strong suit, and the first evidence of that was a goat byriani. Visions of fragrant cardamom pods spangling delicately flavored and intricately layered rice filled our foolish heads, but the reality was quite a different story. The result might be more rewarding with a meat other than goat; ours was typically bony and uncharacteristically chewy — though tasty once you got around all that. The rice seemed wrong, too; it lacked the anticipated lightness. And though we had admittedly asked for everything spicy, heat, ginger, and cinnamon were about all we could detect.

We tasted fresh ginger in other dishes, too, but there it seemed comfortably at home — especially in the full-throttle chicken vindaloo, as lusty a fate as chicken could ever hope to meet. Fortunately, the potato was there to mitigate the heat, both in this dish and in the masochistically marvelous aloo baingan. Kick me, beat me, slather on the spice, but don’t stop; the blend of eggplant and potato with aromatics such as mustard seed, cumin, turmeric (lots of turmeric), and more was impossible to resist. And it was even better spooned onto slabs of onion-filled naan. The best naan I’ve had in recent memory, in fact.

Maharaja’s dessert menu is short; it’s at the refrigerated sweets case that the restaurant’s name begins to make sense. I hadn’t meant to order one of everything to take home, honest. But I somehow ended up with a clear plastic container crammed with besan burfi, pista burfi, besan ladoo, gulab jamun, and  many  more — most very much alike, almost all variations on the theme of cooked-down milk and milk powder. I recommend you try four or five just for grins. The milky taste is preeminent, but there are variations such as delicate pistachio and sugary peanut, and the texture varies from almost crumbly to dense. Especially successful are combinations such as syrupy gulab split and stuffed with burfi. One bite, however, is plenty.