Band of Heathens chages under the alt-country label 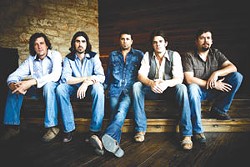 
Four days before he and the band hit Sam’s Burger Joint (“They’ve got a really good room that’s really good for a good show”), Gordy Quist, 29, guitarist and one of the three frontmen for Austin’s Band of Heathens, shared a Fort Worth stage with alternative rock mainstays the Wallflowers, alt-country gods Lucero, Texas traditional-country legend Robert Earl Keen, Americana powerbrokers Cross Canadian Ragweed, and 10 other acts deemed … something ... enough for the fourth-annual Red Dirt
Roundup.

Quist is happy to do it — no apologies, no regrets, no over-analyzing — but the name, the eye-rolling semantics of it all, it’s enough to make him long for when the sweet simplicity of rock ’n’ roll could be just that: rock ’n’ roll.

That’s what the Band of Heathens play, says Quist. That’s what he tells people when they ask, “What do y’all sound like?” Which is all the freaking time.

“The only thing I know to say is rock ’n’ roll, because all those labels mean different things to everybody, he says after a deep breath. “The music we listen to and the music that has moved us, most of it came around in the ’60s and ’70s before all these little sub genres came around.”

Take, for example, the shifting, Texlahoma sands of Red Dirt, which seem supported more by attitude than a particular twang. The only constants? Disdain for Nashville, disdain for rhinestones, disdain for the perceived boot-scootin’ dandification of country music. If it’s supposed to be a fixed style, no one knows what it is or sounds like. When pressed for his own definition, Quist replies “It’s huge … almost a movement it seems,” with a shrug in his voice.

Not that he doesn’t appreciate the complicated psychology behind those little sub genres: Fans and buffs need them, cling to them, to define themselves and distinguish their devotion. Nor is he unaware that some of the modern stuff the band is into (Uncle Tupelo, Wilco, and “the Whiskeytown stuff”) operates under the pretentiously prefixed banner of, yessir, alt-country — a know-it-when-you-hear-it catch-all (one Quist, like everybody involved, hates) coined for hipsters who dig Hank Williams by hipsters who dig Hank Williams (Sr. only, naturally) — and that the Heathens might therefore be alt-guilty by alt-association.

But despite the favorable reviews (comparisons to the Black Crowes and jam-band legends Little Feat are most common), despite the praise, the suggestion that the Band of Heathens and others of their rootsy ilk have sired something magically, musically alt-original sends Quist’s eyes rolling. In the good ol’ days, “radio stations would play Led Zeppelin and then James Taylor and then, I don’t know, the Band,” he says.

“I understand why all these little sub genres have come around,” he says. “But I don’t really think it helps us.”

Of course the Heathens haven’t needed much help. Since forming in 2006 out of what Quist says was essentially an accidental-ish side project for three Austin singer-songwriters who regularly shared the stage at a local club, the band has grown accustomed to acclaim. Live at Momo’s, their first album, spent two weeks at number one on the Americana Music Association radio charts and ended the year at number eight on that chart’s Top 100.

One Foot in the Ether, their sophomore record, is scheduled for a September 15 release.

“I think it’s a more muscular record than our last one,” he says. “I think there are thicker sounds on it. And the writing focuses more on … the big picture.”

That’s pretty apropos, because the big picture, for Quist and co., is coming more into focus every day: a five-record deal on the table from a major independent label … the recent post-South by Southwest plug from Wall Street Journal music critic Jim Fusilli (who said the band “played the best set I came across during my five nights in town”).

The big picture became a masterpiece for Quint, however, when the Heathens were recently invited to a taping for Austin City Limits.

“I grew up watching that show,” he says. “Just last week it was announced as a Rock ’n’ Roll Hall of Fame landmark … even when we were asked to do it, even then I thought it’d never happen.”

But it did happen, and Quist calls it the highlight of his career. To hear him describe it, you probably could have labeled the Heathens a goth band that day. He wouldn’t have cared.