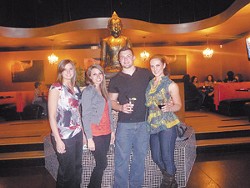 
Business partners David Padilla and Jeremy Roberts had been planning a Buddha-themed bar for some time. Padilla originally wanted to open Buddha Rok in Miami, but when a unique space became available on San Antonio’s North Side, it became home to the 1,200-pound sandstone Buddha he had ordered from Thailand.

Buddha Rok opened several weeks ago with a snazzy Grey Goose-sponsored mixer (Bar Tab wouldn’t exist some days if it weren’t for the Goose). While the event seemed successful, and my Latinas and I got to sample an array of East-meets-West-themed hors d’oeuvre on the patio, I couldn’t stay long enough to quite figure the place out. So last Thursday, I decided to give Buddha Rok a long, hard stare.

“Dinertainment” is a word you’ll see popping up if you visit Buddha Rok, which basically translates to dining in a lounge environment. The crowd is what you’d expect from the neighborhood — privileged-looking young professionals in large, noisy groups. I took a seat at the bar and noticed that, to my left, there were about eight dudes drinking beer from oversized beer mugs, watching the game on a flatscreen TV. The space is divided in such a way that the sports-bar element is fairly contained, and while there are large TVs elsewhere, the bar’s focus is music. Loud music. It was almost loud enough to drown out the shrieks coming from a booth full of girls-night-outers who seemed to be putting ice cubes down one another’s low-cut blouses.

I was amazed to learn that Buddha Rok is housed in a space formerly inhabited by an EZ’s Restaurant. Aside from the signature curvy detailing near the ceiling (which has been painted metallic gold), there’s no evidence of the Jetsons-inspired diner. Where a brick pizza oven once stood, there is now a stone temple topped with a DJ booth. And instead of cheery portraits of rainbows and kittens courtesy of the local elementary school, modern, Asian-themed prints and ritzy chandeliers set the mood. Of particular interest is a hypnotic lighting display that somehow mimics rippling water.

The bar menu offers a unique assortment of small plates such as Asian BLTs, Cashew Chicken Lollipops, and a DIY Tempura Bar, which sounded tempting, but I was more interested in trying one of Buddha Rok’s signature cocktails. Although intrigued by the odd combination of the Tequila Moonrise (tequila, rum, lemon-lime, and sugar, topped with beer), I didn’t have any Advil on hand, so I opted for a Captain Chang (Hendrick’s Gin, Campari, fresh OJ, and ginger ale, $8). It was a perfect slow-sipping concoction, with a good balance of bitter, herbal Campari and refreshing ginger ale.

Browsing the wine-and-beer section of the menu, I noticed something peculiar. The draft beer is served at 29 degrees, which I assumed meant it would be served frozen on a plate. Buddha Rok is the first establishment in SA to own one of these high-tech systems, which employs a frozen network of lines to produce a super-cold beer. The temperature minimizes the amount of foam, which means less spillover waste.

On my way out, I asked Padilla about his plans for the bar. That evening, the DJ booth was empty, so he was filling in, playing random selections from his laptop (by random, I mean from Shakira to Journey and back again). Usually, professional DJs spin Thursday through Sunday until 2 a.m. With a bit of nervous excitement, he mentioned that the Spurs had reserved an entire tier of the lounge for Halloween night. Padilla seemed uncertain how to keep costumed revelers from bombarding them.

Possibly the most exciting (and useful) feature is that Buddha Rok serves food until midnight during the week and until 1:30 a.m. on weekends, which will no doubt accommodate many a tipsy night owl faced with a long drive home.
— Bryan Rindfuss