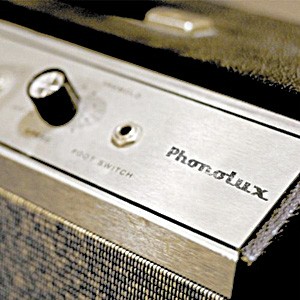 
It’s too late now, but a band with songs and musicianship this good deserves a better name than “Phonolux.” Despite their press release claiming sonic uniqueness, the band didn’t invent a new wheel. Their self-titled debut is song-oriented ’60s and ’70s rock, pure and simple. There’s nothing flashy, pretentious or contrived about the quartet of Buddy Calvo (piano, guitar, bass, drums, and vocals), Art Guillermo Jr. (bass and drums), Miguel Romero Jr. (guitar, piano, and vocals), and Dave Novak (drums, guitar, bass, piano, and vocals). The CD cover depicts an amplifier (as if to justify the name, perhaps?) and the inside photos feature four guys just standing there, or sitting at the studio.

When you listen to the album, it all makes sense: This is a serious band more interested in writing and properly recording good songs than in shocking audiences. Even though the band has three good singers and songwriters (Buddy wrote seven of the 10 tracks), they were able to achieve a cohesive Beatles-meets-Supertramp sound, with subtle touches of David Gilmour, both vocally and guitar-wise. They’re not afraid of dysfunctional-love arena hymns (“I spent all day pulling bullets out of my back/ She drops her gun, turns around, walks away and starts to laugh,” they sing on “You Shouldn’t Want It”), and despite lyrics like “Whatever happened to your big toe? Did the nail come back like you’d hoped?” (“Chicago”) and obvious references to astronauts in “Andromeda” (complete with actual — and needless — NASA tapes), overall the band delves into relationships and existential doom (“Bitter”) with the polished results of guys who really take songwriting and recording seriously. Catch them live for $5 on Saturday, December 19, at their CD release party at the Limelight (2718 N. St. Mary’s), with White Elefant and Cartographers. Although it’ll be fun to see the Phonolux members rotate and take one another’s instruments from song to song, this is a band you can enjoy with your eyes closed. — Enrique Lopetegui