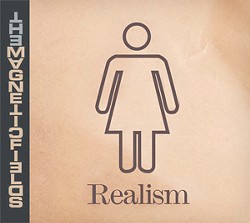 
Stephin Merritt rarely steps into the studio with his rotating collective the Magnetic Fields without a concept. His greatest thematic work is 1999’s 69 Love Songs, a three-disc release exploring the subject in all its melancholy splendor and dysfunctional perfection. Merritt’s last go-round with his band, 2008’s atypical Distortion, is a wildly noisy homage to the Jesus and Mary Chain’s frenetic sonic blur. For the new Realism, Merritt goes to the other end of the spectrum by placing 13 tracks in a baroque-pop/psych-folk framework. Inspired by the late 60s British folk scene, when producers and artists were mesmerized by the trippy sounds of contemporary rock, Merritt writes his new songs in the era’s many-faceted context from the sparsely orchestrated toy-piano naiveté of “From a Sinking Boat” and “The Dolls” Tea Party” to the more baroque modernity of “You Must Be Out of Your Mind.”

Although Merritt invests Realism with ’60s folk and ’70s psych-pop, his charmingly acidic lyrical approach is intact (“You can’t go round just saying stuff/Because it’s pretty/And I no longer drink enough/To think you’re witty” from “You Must Be Out of Your Mind”). Occasionally, Merritt follows ’60s folk a little too closely: Realism’s 33-minute length reflects vinyl’s space limitations, and the Far East-flecked “I Don’t Know What to Say” fades just as the track hits its stride — intentionally, since it ends before the song’s protagonist can say the dreaded three words he knows he should say. Nevertheless, Realism is another reflective and beautifully rendered concept piece. — Brian Baker