Pockets of cruelty-free food at Beto's 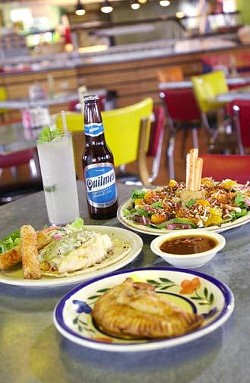 
There are two distinct views from which to experience Beto’s Comida Latina. There are the rows of bright-red wooden patio benches leading to a listing wooden play gym outside, and there’s the interior view of the jet stream of steaming plates taxiing behind the kitchen’s aquarium glass. From either perch at this tried-and-trusted staple of the city’s foodie circuit, the only place to go is spiraling for the rocks of abandon.

That’s really the only question in my mind as I dissect a fat-portioned plate on a recent 59-degree day, my shoulders cooking beneath a high-noon open-sky sun: Just how hard and fast do I want to fall in love again? Yeah. Any vegetarian from any mid-sized-and-up metropolis will find this interior-Mexican food a nice change of pace. We’re cruising hundreds of feet above the plains of cheese quesadillas and bean burritos.

Some keys to experiencing the Beto’s amor: Don’t get distracted by the ADD child who doesn’t even notice the sun-bleached outdoor television broadcasting Dora’s ever-loving exploring. Don’t sweat all the options you can’t have (pozole, fideo ... how hard would it be to drop the chicken broth or pork bits?). Focus instead on the 20 percent of yum made with you in mind. On a first visit, assemble a $9.99 Number Two by choosing a taco and an empanada.

The “veggie” is the only meat-free taco. According to the menu (and past experience) it comes stuffed with “assorted” mushrooms, squash, onion, and corn. Today, I’m shorted the mushroom and corn, but the wide-sliced squash holds the caramel-rich flavor of sweetened onion and the suspiciously elastic corn tortilla magically stands up against the broth. A sprinkle of fresh cheese is a nice accent, but thankfully it’s just that. So many omnivore lunch wagons, unsure how to actually cook the greens, golds, and yellows, throw a fat slab of queso over top as if fat can heal bland food. Here, a softer touch is a welcome one. A veggie taco and
a spinach-potato
empanada at Beto’s

The spinach and potato filling in my empanada has its share of dairy, too, but it’s kept to a complementary ratio. By the time I’ve worked my way around to it, I’m happy to find the flaky crust holds the heat like a champ. The rice is worth mentioning for the lack of gluten that makes chopsticks at other eateries a workable gullet-delivery mechanism. Here, the grains are plump as grubs and speckled with peas and carrot. A sprinkle of paprika adds spark to the yucca fries I opt to replace the salad garnish (for an additional 75 cents), but two of the four finger-sized slivers are too solid to masticate despite their frying and the vinegary chimichurri dipping sauce.

But all the thoughtful eating in the world won’t save you from the last question of your meal. Let me answer for you: Yes, you would love a dessert empanada. The banana with leche quemada and pecan would be perfect, thank you. After initiation, break out with the jicama salad and black-bean soup for a second take. After all these years and a wall-full of recognitions, those empanadas aren’t going anywhere. •