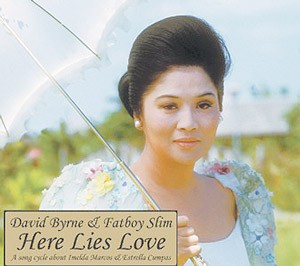 
David Byrne and Fatboy Slim have long and illustrious histories as sonic experimentalists and collaborators. So it makes sense they would eventually join forces. Here Lies Love is a concept album — a weird tale of Imelda Marcos, wife of ousted Philippine dictator Ferdinand Marcos and the butt of many shoe jokes. Byrne and Slim fashion a soundtrack from the grab bag of their individual strengths. They weave indie pop, disco, breakbeat and tropicalia into a fantastic texture that bubbles and bounces across the album’s nearly two dozen tracks. The 21 guest vocalists (Byrne sings on only two tracks, and one is a duet with My Brightest Diamond’s Shara Worden) make Here Lies Love even more oddly appealing and provide the variety that makes the concept effective. The album begins with the title cut, which finds Marcos reflecting on her life and writing her own epitaph (“Here Lies Love”). Sung by Florence Welch (from Florence and the Machine), the song soars like an undiscovered ’60s AM-radio hit. Tori Amos smokes the pop samba of “You’ll Be Taken Care Of,” Cyndi Lauper bops with aching purpose through “Eleven Days,” and Martha Wainwright glides above the 10CC-meets-Van Dyke Parks pop of “The Rose of Tacloban.” The album shifts into even higher gear on the second disc. Sharon Jones swaggers authoritatively in “Dancing Together,” Alice Russell is boisterously cool in “Men Will Do Anything,” B-52’s chanteuse Kate Pierson skips in and around the disco thump of “The Whole Man,” and indie darling Santigold pleads with political savvy in “Please Don’t.” David Byrne and Fatboy Slim complicate the process with the Marcos concept, the album’s length, and the 21-singer salute. Still, it’s an unexpected pop delight. — Brian Baker