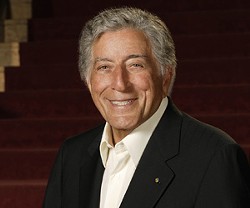 
Tony Bennett has been quoted as saying, “If you study the masters ? Picasso, Jack Benny, and Fred Astaire ? right up to the day they died, they were performing. If you are creative, you get busier as you get older.” It could be said that creativity played a part in Bennett’s comeback in the ’80s and ’90s, when appearances on shows like Late Night with Conan O’Brien, The Simpsons, and MTV Unplugged (“I’ve been unplugged my whole career,” Bennett joked) broadened his audience without compromising his classic style. According to The New York Times, “Tony Bennett has not just bridged the generation gap, he has demolished it.” Widely considered a national treasure, Bennett has sold a reported 50 million records, won fifteen Grammys, and continues to tour and record at the age of 84. Trivia: A Citizen of the World (an award given by the United Nations), Bennett is also an accomplished painter with work — a painting of Central Park — hanging in the Smithsonian’s National Portrait Gallery. $51-$126, 7pm, The Majestic Theatre, 224 E Houston,
(210) 226-3333, majesticempire.com, tonybennett.net.