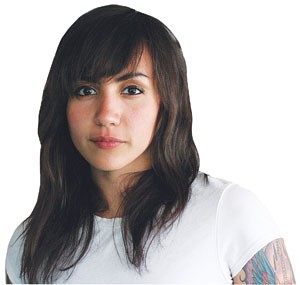 
It was evident in the flurry of online responses we received lamenting the absence of Girl In A Coma among last week’s Rammy Award winners that this city really, really likes GIAC. So do we! In case you forgot, we dubbed their latest, the eclectic Adventures in Coverland, one of our local faves of 2010. So what happened? Didn’t turn your ballot in? For shame. Thankfully, there’s a way to make it right — catch GIAC singer and guitarist Nina Diaz in a rare solo performance at Casbeers. She’s been the primary songwriter since the band’s inception, a charismatic frontwoman who continually mesmerizes audiences with her smoky vocals and distinctive, distortion-heavy ax-slinging. If you haven’t heard, GIAC just topped Esquire Magazine’s December list of “The Best New Songs You Probably Haven’t Heard” for their take on Joy Division’s “Transmission.” Our request from Adventures? Diaz’s fierce version of Patsy Cline’s “Walkin’ After Midnight,” which probably already made the set list. With special guest David Garza, $10-12, 9pm Thu, Dec 23, Casbeers at The Church, 1150 S Alamo, casbeers.com.