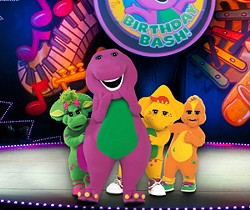 
When Catholic watchdog groups decided Barney & Friends (which first aired in 1992) condoned witchcraft and necromancy, the purple anthropomorphic T. rex was banned in the Philippines. Other countries dismiss the show for its glaring lack of educational value. But none of this seems to faze Barney, who thrives on a diet of peanut butter and jelly sandwiches and loves marching bands, parades, and entertaining children — which is, incidentally, how he intends to celebrate his 18th birthday. A few things to consider: WikiParenting, which is operated by Nickelodeon, warns of scams orchestrated by ticket brokers, including one known as “Barneygate,” so stick to Ticketmaster. Also, if you’re dreading taking a crew of toddlers to this “super-dee-duper live stage concert,” and also happen to have a twisted sense of humor, get a dose of pre-show comic relief from Uncyclopedia, the content-free encyclopedia (mirror.uncyc.org/wiki/Barney_the_Dinosaur), which alleges — among countless other things — that Barney is both the Anti-Christ and the gay son of Godzilla. $15-$50 ($50 Dino Seats include a pre-show meet-and-greet with Barney), 3pm & 6:30pm, Freeman Coliseum, 3201 E Houston, (210) 444-5000, ticketmaster.com, barneylivetour.com.