Art opening: Andy Benavides: Am I What? 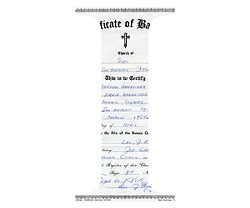 
With undeniable polish on practically everything he touches (including the majority of the contemporary art being framed in San Antonio), it makes perfect sense that artist Andy Benavides earned a degree in advertising art. Although Benavides (who’s also the founder of the not-for-profit organization Supporting Multiple Arts Resources Together, or S.M.A.R.T.) “never spends too much time dabbling in any one medium,” you don’t have to look far to find proof that he’s mastered several of them. Roughly four years after the installation of his public art project “Aztec to Nortec” at the Museo Alameda, it’s hard to imagine the corner of Santa Rosa and Commerce without his glowing purple wall of light and sound. And the unofficial mascot for Team Benavides, a concerned-looking pink bunny, penetrated SA’s collective consciousness long ago ? as graffiti, as a piñata, and as a mischievous avatar for the South Flores Arts District. In the press release for Am I What?, Benavides’ self-searching exhibit at Sala Diaz (on view by appointment through February 27), the artist recalls a touching dialogue with his now deceased father. “Pop, what am I? Mexican, Spanish, Italian, Jewish, Palestinian?” young Andy asked. “Mijo, you’re American because you were born in America,” his father answered. The only visual clue we’ve been given from Am I What? is a capital letter “I.” Cut with his father’s confidence and precision from a baptism certificate from the Church of St. Leo, the letter is one of five parts to Benavides’ installation — which might spell something out. Free, 7-11pm, Sala Diaz, 517 Stieren, (210) 852-4492, andybenavides.com.