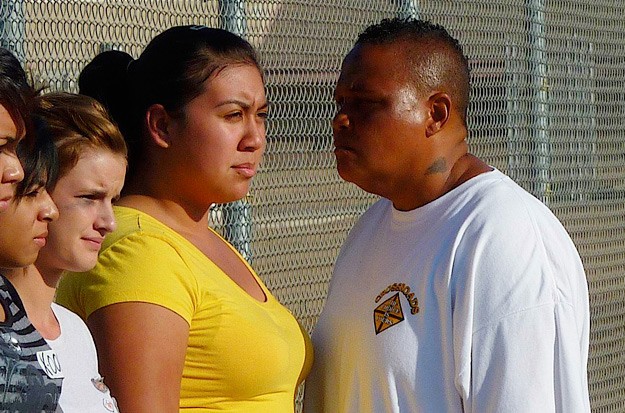 Take a peek at this video, and then take a moment to think about it.  It's a clip from one of A&E's new - and very insightful - reality shows, "Beyond Scared Straight."  In watching the show, I came to know the stories of a handful of teenage girls and why they were chosen to visit an all-female prison located in Chowchilla, California.  The series aims to take viewers "into some of the toughest prisons in America to observe inmate-run programs aimed at showing troubled teens the horrors of prison life in the hope of  keeping today's kids from becoming tomorrow's convicts."  The girls possess the same I-don't-give-a-shit-what-you-think disposition that's privy to most teenagers, but they take that attitude a step further by actively engaging in drugs, crime (mostly non-violent), and toxic relationships.  With the high school dropout rate at over 50% in San Antonio, I couldn't help but draw comparisons to the future challenges that our own community will face if our youth does not find a way into the proverbial light. The United States prison system is overcrowded, and there is no debating that fact.  According to a report released by the Justice Department in 2008, a record 2.3 million people occupied the nation's prison and jail system.  To put that number into perspective, the U.S. rate of incarceration (762 per 100,000) is five to eight times that of other highly developed countries, according to The Sentencing Project, a criminal justice think tank.  A staggering amount of our tax dollars are being spent on the free rent and food that's provided to prisoners throughout the country.  We could go on for days about all of the flaws the system just can't seem to get fixed: prison suicide rates, sexual harrasment cases, rehabilitation (or lack thereof).  The list goes on and on.  But I know one problem that we can do something about, starting right here in San Antonio. This isn't a matter of personal revelation.  We've all (hopefully) heard it for as long as we can remember: education is key.  What are the other half of our youth doing once they drop out of high school?  Without at least a high school diploma, their chances of getting any type of job diminish very quickly, and without any type of income, many of them are turning to crime.  What becomes apparent is the unfortunate truth that race and crime are linked.  African Americans make up over 60% of the prison population, even though they only account for 13% of the country's population.  Though the Latino prison occupancy at 21% isn't as high, it's equally as problematic.  Let's stop there and examine the numbers: 81% of the entire system's population are members of a minority.  Why is such a large portion of our gente choosing to forego the opportunity for a better life?  Or are they?  Is our community predisposed to this type of life because of the hand we're dealt from the get-go?  Or do we have the means to change the alarming rate at which we're being incarcerated? It is a slippery slope, to say the least.  The San Antonio community is predominantly Mexican American, and dropout rates are higher in inner city school districts. Because inner city schools are more heavily populated with Mexican American students, more of our dropouts are young Latinos.  The story doesn't end there.  When kids don't graduate, it doesn't just mean they won't get a high school diploma.  It's also a hard stop on the road to any type of higher education.  For example, Alamo Heights High School, which is commonly known throughout the city as a more affluent school based on neighborhood, boasts a whopping 95% of its students attending college upon graduation, while John F. Kennedy High School on the city's Westside sends a mere 25% of its students off to colegio, according to A Marmac Guide to San Antonio. Should we give pause to the fact that one of the teenagers actually saw her mom looking back at her at the prison she visited in Chowchilla?  "This isn't the place for you," the prisoner cried to her daughter.  But perhaps that's part of the problem.  Displaced youth oftentimes have no sense of purpose and lack any feeling of community, but there are organizations throughout San Antonio that are doing something to fill that void.  Communities in Schools of San Antonio is a chapter of the nation’s leading dropout prevention organization – the only one with measurable proof that its efforts decrease dropout rates and increase the likelihood of graduation.  Their case managers work in the schools, directly addressing the risks that confront many students even before they reach the school doors.  CISSA connects students and their families to critical community resources and services tailored to meet their needs. Where does all of this leave the future of our city?  Do shows like BSS offer any type of remedy to our social ailment?  Or are they temporary fixes to a chronic and recurring dilemma?  The fact is that we still have the ability to change the story of this city's youth, because this is where we have the most immediate and direct impact on the matter at hand.  Let's not let them fail themselves. Feel free to send your thoughts on this or any other issue related to our Xicana/o community to me at cx@sacurrent.com.