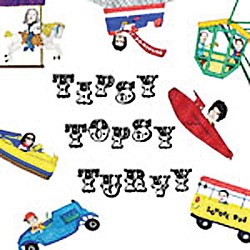 
With Tipsy Topsy Turvy, The Krayolas went from being Americano — the name of their previous album — to being “Your Dirty Mexican,” as they sing in “1070,” the provocative pro-immigrant/anti-Arizona-BS hymn. Paradoxically, you won’t hear any of the Krayolas’ usual family-oriented pop hits like “Frutería,” or any of the unusual “Wall of Accordion” experimentation of Americano. It’s as if that album had been a painful thing to record (and the faces of confused fans a disappointing thing to observe). So with this one the Krayolas went back to basics with a vengeance and delivered their best, straight-ahead rock ’n’ roll album in years. Byrds guitars (“Gonna Walk Downtown”), blues shuffle and Beach Boys harmonies (a cover of Ram-era Paul McCartney’s “Smiles Away”), plain ole’ R&R (a cover of Chuck Berry’s “Run Rudolph Run”), and Héctor Saldaña’s Elvis Costello growl are the stars of the show. Producer Joe Treviño is not concerned with subtleties, going for the big-picture jugular instead. Sure, some things could’ve used a different arrangement and some songs fade out when they’re about to take off. But the album has an irresistible ’60s feel and I’m dying to hear it performed live.