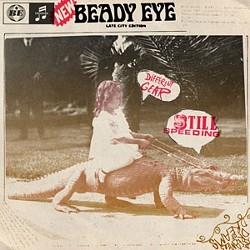 
Oasis is dead. So are the Beatles. Someone should tell Beady Eye. It wasn’t enough to suffer the humiliation endured during the early days of alternative rock because of a wimpy twerp named Liam Gallagher (and his so-called brother), but the somber half of the once-sonic duo just won’t quit. His blend of pure Beatles-meets-stomp rock, handclaps and all, with covers and dire lyrics gyrating to the point of interjecting a Jerry Lee Lewis piano tribute, feel as if Lennon is looking down smiling fondly. There’s a word for it: grandiose. He even names songs for them: “The Roller” and “Beatles and Stones.” But pondering the deep blue sky and trying to stand tall are poetic postures better saved for someone who cares. While all the sha-la-las might have hips swaying in crowded mid-sized rock halls, Gallagher (either one of them) will still only be a footnote in the history of ’90s rock annals.