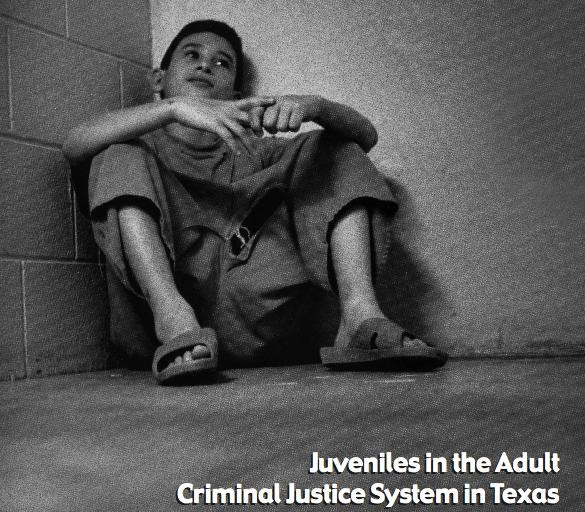 It’s commonly assumed that juvenile offenders thrown into the adult court and prison system are the worst of the worst, beyond rehabilitation. But a new report released today paints an altogether different picture.

In Texas, a judge can certify juveniles between ages 14 and 17 as adults if they’ve committed a felony. While being tried as an adult, they’re housed in county jails and are then handed over to the Texas Department of Criminal Justice if convicted.

But Texas law gives judges another option. A judge can give juveniles a so-called determinate sentence, up to 40 years depending on the charge, and initially served in a Texas Youth Commission facility. By the time they’re adults, they are then reevaluated and can be transferred to the adult system if a judge sees fit.

Since 2005, Texas judges have transferred 1,292 adolescents to the adult criminal justice system, compared to 865 given determinate sentences and placed in a TYC facility. And while it’s generally thought that teens tried as adults are the most serious offenders, data from Deitch’s report shows little difference between those who wind up in an adult prison and those sent to a youth facility. Most have committed some type of violent offense and have either a single or no prior juvenile court case.

The only significant difference between teens who wind up in adult prisons and those who are sent to the TYC is the county where they were convicted, according to the report. For instance, between 2006 and 2009 Harris County judges certified over 300 teens be tried as adults, while in Bexar County only 62 were transferred to the adult system.

The report also busts the myth that teens transferred to the adult system are only those who have committed heinous crimes, or are violent repeat offenders deemed a lost cause, Deitch said.

While it’s true the majority are charged with violent offenses, only 17 percent are homicide cases. About 15 percent of teens transferred to the adult system are charged with non-violent felonies, including drug charges, and almost 90 percent have no prior history with the TYC at all, Deitch said, adding, “This shows the vast majority have never even been through the toughest options the juvenile system has to offer.”

“I think what this [report] does is it really disproves the idea that these are all violent, chronic felons – really the worst offenders.”

Deitch’s report also highlights the difference between adult incarceration and a TYC detention setting, saying there are serious consequences of routinely sending juveniles to adult prisons.

One TYC program for violent teens, the Capital and Serious Violent Offenders Program, has been widely successful at keeping adolescents from reoffending and ending up back in the system. Deitch cited a Centers for Disease Control study that says youth transfer to an adult jail not only has “no deterrent value” but actually raises the likelihood of a subsequent violent offense by 100 percent.

Placing juveniles in adult jails “puts them at an increased risk for suicide, mental health problems, sexual assault and physical assault,” Deitch said. “Adult jails and adult prisons are just not the right place for youth.”

“By placing a youth in an adult jail, you’re actually preventing them from getting the necessary rehabilitation and education programs they need to get back on track,” said Ana Yañez-Correa, executive director of the Texas Criminal Justice Coalition. “You’re undermining their future and setting them up for failure for the rest of their life.”

“No child is unsalvageable,” she said.

Deitch and Yañez-Correa both said they hope the report resonates with lawmakers as they consider a handful of bills filed in the Lege this year, one of which would even change which offenses would make an adolescent eligible for transfer to the adult criminal justice system.

Even for those juveniles that have been certified for trial in the adult system, they should be held in juvenile facilities while they await trial, Deitch remarked, insisting county jails are not fit to care for adolescents.