Run for Your Life! It's not Peter Cottontail... It's the Bunnyman! 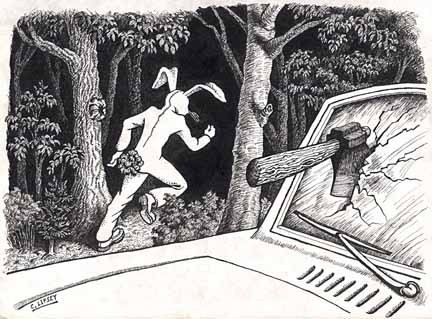 One of the oddest urban legends in the U.S. revolves around a dubious figure known as the Bunnyman. Said to haunt the area around Fairfax County, Virginia this phantom, man-beast is likened to an axe-wielding maniac. But with a strange twist, as he apparently is always seen dressed in a white bunny costume! Reports of Bunnyman started to surface during October of 1970, when a young couple parked on a desolate lover’s lane claimed that a crazy man sprang out of the woods and shattered their windshield with a hatchet. Both eyewitnesses told officials that their assaulter had been sporting a rabbit suit with large, floppy ears and that he had been ranting at them to, “Stay off his property.” Two days before Halloween, a third witness reported that he had observed the Bunnyman smashing the wooden porch of a vacant home with a long-handled axe. A story soon surfaced about a lunatic that had escaped from a local mental institution. It was believed that he was living in the nearby woods and it was also rumored that the insane escapee had murdered his entire family

on Easter Day no less. Citizens began to whisper in hushed tones about how skinned, rabbit carcasses had been found hanging on fence posts. Before too long, an understandable fear swept the local populace. To this very day, there is an old, stone, railroad bridge at Colchester Road, which is said to be the Bunnyman’s favorite haunt. Local teenagers dare each other to drive underneath on moon filled nights, since it is believed that Bunnyman will pounce onto the hoods of passing cars. The region around Washington DC seems to be a hotspot for anthropomorphic beings, as neighboring counties boast similar creatures known as the Goat Man and Pig Woman, respectively. - Ken Gerhard