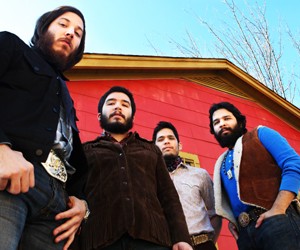 
Not unlike Austin’s Grupo Fantasma, who found fame under Prince’s purple wing, Hacienda (brothers Abraham, Jaime, and Rene Villanueva, plus cousin Dante Schwebel) owe a bit of their mass appeal to The Black Keys’ Dan Auerbach, who produced, engineered, and mixed both Loud Is the Night (2008) and Big Red & Barbacoa (2010) and tapped them as support for a big-time tour. If you’re not familiar with the quartet, which many consider one of SA’s finest musical exports, imagine an easy-drinking blend of neo-vintage garage rock with Beach Boys-inspired harmonies and plenty of local flavor. On Friday, Hacienda become the fourth band to play the Hotel Havana’s “Havana Sessions.” Coincidentally, Brownout! (Grupo Fantasma’s “offspring and germinating seed”) play Luna (6740 San Pedro) later that night. $10 in advance; $12 at the door, 7:30pm, Hotel Havana, 1015 Navarro, (210) 222-2008, havanasanantonio.com.