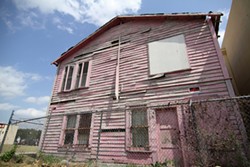 One question still hangs over the debate surrounding Casa Maldonado, affectionately dubbed the “Pink Building” by those who would preserve it: Can it be salvaged? As Council unanimously voted Thursday to reject historic landmark status for the building, that question remained largely unanswered. The vote, which denied preservationists the one tool that could have halted the Avenida Guadalupe Association’s plans to tear down the small pink house, could very well mark the end of the long battle to save Casa Maldonado, an effort by an ardent group of community organizers and preservationists who insist the building is a treasured piece of Westside culture and history [See: "Fight over decrepit Maldonado Building about honoring Westside soul," April 27, 2011]. Despite the pleas, District 5 Councilman David Medina, whose district includes the decrepit building, led the vote to reject historic landmark status. Avenida CEO Oscar Ramirez has long said Casa Maldonado is unsalvageable, pointing to an engineering report commissioned by Avenida in December that states repairing the building and bringing it up to code wouldn’t be “structurally feasible.” But this week the Westside Historic Preservation Group and the Esperanza Peace & Justice Center, groups hoping to save Casa Maldonado, scored an emergency grant from the National Trust for Historic Preservation to commission their own structural report on the building. “We’ve never believed that demolition is the only option for Casa Maldonado,” said Esperanza director Graciela Sanchez. “[Avenida] had a design they liked, and demolition was part of that of course their report would say [preservation] is impossible.” Esperanza had hoped the vote could at least be postponed until after their new report surfaces. Structural engineer Patrick Sparks, who most recently worked with the city to preserve and rebuild the historic Eastside Hays Street Bridge, is set to inspect the building and make his own report within the next two weeks. “They could have at least waited until we see what this engineer says about [the building],” remarked Susana Segura, an activist with the Westside preservation group. Avenida decided early this year to demolish the structure, built sometime between 1919 and 1924, to make way for a 21,000 square-foot building that will house workforce training and commercial and retail office space, center of the group’s Promesa Project. Throughout numerous city and neighborhood meetings, Avenida staff and supporters have said the Pink Building stands in the way of progress, economic development and job creation on the west side. Avenida supporters on Thursday also questioned the building’s significance, saying preservationists’ history of Casa Maldonado, confirmed in a report by the city’s Historic and Design Review Commission, is suspect. “I don’t understand that,” said Segura, “That history has already been proven by a panel of experts, which is the HDRC.” Avenida has rebuffed community groups asking that Casa Maldonado be incorporated into the plans for the Promesa Project, saying the repairs would be too expensive. In April Ramirez claimed it would take nearly half a million dollars to bring the building up to code. That estimate had ballooned to over $800,000 by the time Ramirez spoke before council Thursday. Preservationists counter that they would gladly launch a fundraising effort to pay for repairs. “We even asked [Ramirez], ‘If we raise $1 million, would you save the building?’ Still, the answer was still ‘no’,” Sanchez said. 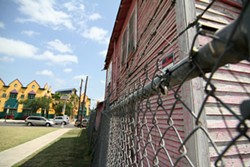 The case has become a microcosm of the debate over preservation versus progress in the city’s historically impoverished Westside. Though preservationists say the two aren’t mutually exclusive, a number of those supporting Avenida’s plan say Casa Maldonado is a Westside stain, a crumbling blight on the community. Ramirez insisted continued delays could jeopardize the $2.3 million in federal grants dedicated to the $5.5 million Promesa Project, money that’s tied to a September 2013 deadline. “We know we need to break ground within the next couple months at the latest to meet that deadline,” Ramirez said. Some council members and the Mayor coupled their support for Avenida’s project with an expectation that Avenida work more closely with preservationists. Mayor Julián Castro said told Ramirez, “I agree with folks that have said that job creation and the preservation of our history are not mutually exclusive The council is forgoing the opportunity to designate this property as historic, which essentially is giving y’all the flexibility that you need because we believe in the vision that you and the Avenida Guadalupe have for this place. “At the same time,” Castro said, “basically your credibility going forward with this City Council and with the community is on the line. And part of what we need to see is a commitment to some alteration of what the plan is now.” It’s unclear how willing Avenida will be to change its plans for the Promesa Project going forward, given Ramirez’ hard-to-decipher statements both before and after council's vote. When Castro asked if Avenida would take any additional structural report on the building into consideration, Ramirez remarked, “This has been a difficult discussion...It makes it very hard to say to you, ‘yes that is going to happen.'" Asked if Avenida will go forward with the design as planned, Ramirez said, “I think it’s pretty clear that we better not.” Regarding the possibility of including Casa Maldonado in any updated plans: “I just cannot answer that for you According to our reports, there’s nothing to preserve.” - Michael Barajas, mbarajas@sacurrent.com