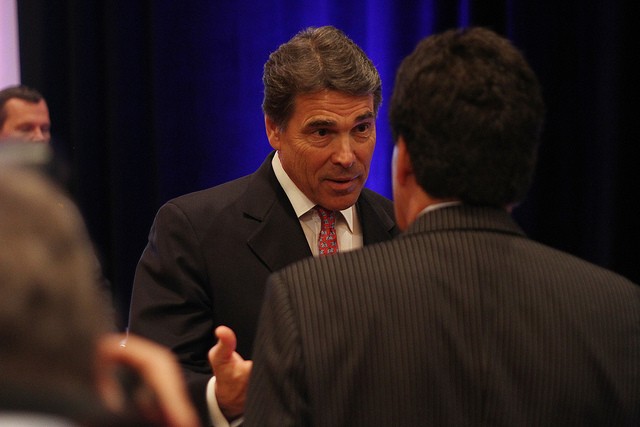 Gov. Rick Perry's reception in San Antonio Thursday was anything but warm. As the governor openly plays with the idea of a White-House run, protestors outside his speech to a group of Hispanic leaders called the visit “insulting” and a clear attempt to court the Hispanic vote. Dozens gathered outside the Grand Hyatt downtown to chide Perry for continuing to push what they consider anti-immigrant legislation that the governor has revived in the Lege's special session. Perry, one of the keynote speakers at Thursday’s luncheon for the National Association of Latino Elected and Appointed Officials (NALEO), added SB9 to the special session call earlier this month, breathing new life into a bill that would ban so-called “sanctuary cities” and expand the controversial federal finger-print sharing program known as Secure Communities. A similar bill died in the regular session. “We feel that our communities are under attack right now,” said Claudia Sanchez, an organizer with the League of United Latino American Citizens. “It’s ironic, the fact that he’s here speaking to an organization which is mostly Latino when he’s attacking that very same community.” Texas Indigenous Council founder Antonio Díaz insisted, "We're in a fight. We the people need to stand up and say we don’t want this racist legislation." 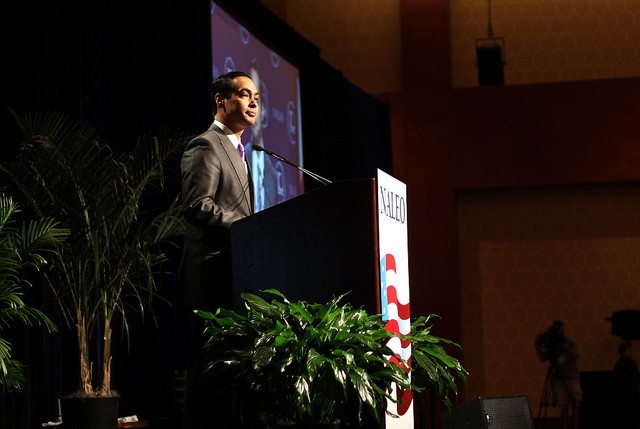 Outside the hotel, Perry faced shouts of “racist” and “You’re not welcome in San Antonio.” Inside the conference, the tone was no less harsh. Mayor Julián Castro delivered his own sharp criticism in a speech before Perry took to the podium. “I have to tell you that these days sometimes I feel like I’m at the beginning of a Dickens novel the best of times, the worst of times.” “Last year, we knew of legislation in Arizona, SB 1070, that was aimed at trying to go after folks who have largely tried to make a good and honest, hardworking life in the United States," Castro said. "We’ve seen in the State of Texas the call for Arizona-type legislation. We have seen, in this legislative session, easily the most anti-Latino agenda in more than a generation pursued without shame.” In his brief speech that followed, Perry touted his economic policies, steering clear of his self-declared immigration “emergency” and the controversy it has sparked. Perry declared that Texas owes its economic success to low taxes, “a regulatory climate that’s fair and predictable,” and “a legal system that doesn’t allow for over-suing,” a message he’s begun to take around the country. “It’s not a stretch to suggest that the future of Texas is tied directly to the future of our Hispanic population," Perry said. The governor also took the opportunity to remind the crowd of Latinos he has appointed to high state offices, including Secretary of State Esperanza "Hope" Andrade and Texas Supreme Court Justice Eva Guzman. - Michael Barajas, mbarajas@sacurrent.com