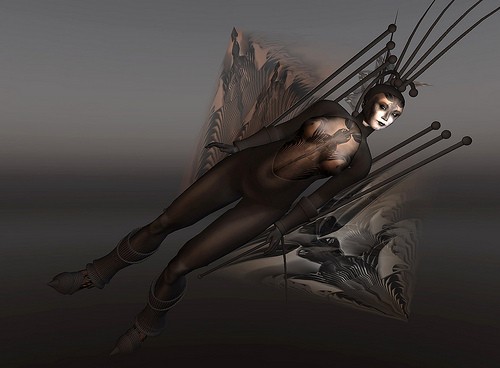 Recently, I received an unusual report from colleagues who belong to a leading UFO organization. My associates had been contacted by a San Antonio family who claimed to have had a remarkable sighting near their home in the area around a local airport. According to their account, it was during April of 2009 when the incident occurred. At the time, the lady of the household was standing in her driveway having a conversation on her cell phone, when she happened to glance up and spotted what appeared to be a huge, dark winged man gliding through the air! Startled and amazed, the woman ran into her house and yelled at her husband and son to come and take a look. All of them were in full agreement that they were in fact watching what appeared to be the form of a man-bat flying by. The strange figure eventually disappeared out of sight. Regrettably, to date the family in question has been hesitant to conduct a personal follow-up interview with me or any other investigators. Perhaps they merely imagined the whole thing, or made it up or maybe they have come to realize that some subjects are better left alone. As incredible as it sounds, there have been other documented reports of similar winged humanoids throughout South Texas. According to a newspaper article that appeared in the Houston Chronicle on June 19, 1953, three residents of that city observed a manlike figure perched on the branch of a pecan tree. The Houston Batman as he became known, was apparently adorned in a black paratrooper costume, complete with attached wings and knee length boots. But the strangest attribute, according to the eyewitnesses, was the fact that the batman emitted a dull, gray glow that faded out right about the time he vanished from their sight. Stories about winged humanoid creatures can be found throughout Texas and Mexico. In Rio Grande City, there were rumors of a man-bird that haunted the roof of a local tavern during the 1970s, and Robstown near Corpus Christi has a local legend about the pájaro hombre. In November of 2007, a San Antonio man named Frank Ramirez appeared on a local news broadcast and stated that he had encountered an enormous, winged humanoid on the city’s Southside one evening. Those who study such phenomena have suggested these may be inter-dimensional time travelers or the like. What do you believe? Are these merely tall tales, or is something taking place that is beyond our comprehension? — Ken Gerhard