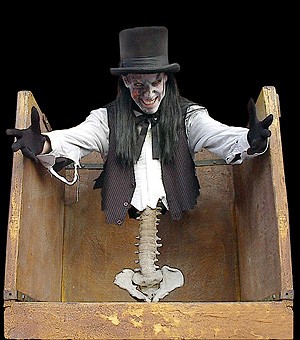 In a recent issue of the Current, I rated a half dozen of the top haunted houses in San Antonio. These rankings apparently drew the ire of management over at Ripley’s Haunted Adventure. They felt my description of their event as being ‘family friendly’ was off base. Thus, a challenge was issued — I was invited down in order to visit the location, as it is apparently beefed up now for their Fright Night weekends extending through the rest of October. Being that I spend much of my time chasing monsters and phantoms through real-life haunts and hollows — and that I giggle uncontrollably through movies like The Exorcist — I was eager to see if it could actually scare me.

er eyeballs. In recent years, these attractions have become a million-dollar industry, employing top Hollywood special-effects experts in order to design the lavish sets and makeup, and employing the caliber of actors that are usually associated with Renaissance festivals. All this in order to provide guests with a terrifying experience befitting of higher ticket prices.

I arrived at Ripley’s on a Friday just before midnight. It’s actually located right across the street from the certifiably haunted Alamo, so I wondered whether the appearance of real ghostly apparitions might add to the excitement. I insisted on going through the event by myself, something that has apparently never been done. I wanted to avoid the false sense of security that other people would provide. Out front there was a stilt-walking, ghoulish clown and a zombified barker whose vocal effects reminded me of an auto-tuned Marilyn Manson.

I was quickly ushered aboard a rustic, cage elevator, which shook and jolted me as it ascended to its destination. Like most spook houses, I was led down a series of darkened corridors and sets where at least a dozen actors popped out of trap doors and windows. Additional startles were provided by sudden loud noises, including blasts of air and banging sounds. The actors were enthusiastic to be sure, and I learned later that they had been briefed that I didn’t scare easily. Many of them followed me along for a bit, antagonizing me. My one criticism is that they seemed to be rushing me through, so I didn’t have adequate time to soak in the elaborate and grotesque decorations, which included animatronic monsters and a multitude of apparent corpses in various stages of decomposition.

At one point, I had to navigate through a long and tight smothering corridor that reminded me of plunging headfirst into a gigantic, black beanbag. Anyone who is claustrophobic would hate it. The highlight was definitely a carnival-themed section where a menacing killer clown egged me on as I traversed a narrow bridge through a spinning vortex of colored lights (that gave one the illusion of turning upside down). An impressive effect, to be sure. Towards the end I was chased by the obligatory chainsaw-wielding maniac.

All in all, Ripley’s Haunted Adventure was scarier than I anticipated. Admittedly the last time I visited it was during the off-season when the event is geared for tourists and their families. Manager Alex Amaro (who was fittingly born on Halloween) informed me that the cast is beefed up to 25 or so actors during the Fright Night season. He also told me that the attraction is entering its 10th year and that it is ever changing, with at least 2 or 3 new scenes per year.

Furthermore, Amaro confirmed that the location seems to really be haunted and that employees have complained of disembodied sounds, in addition to feelings of uneasiness. We discussed the possibility of my mounting a thorough investigation there at some point in the near future, in order to determine the level of paranormal activity onsite.