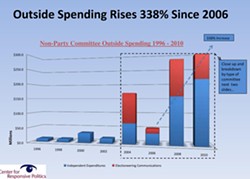 This Friday the federal courthouse downtown will get Occupied. And while the terminology will be familiar enough that our readers don't really need it spelled out for them, this occupation deserves two clarifications. Protestors rallying on January 20 only have both a specific agenda (overturning the Supreme Court's majority decision of Citizens United v. Federal Election Commission responsible for the flood of anonymous dollars now usurping our political process with untraceable corporate dollars) and the benefit of organization (organization, that is, beyond the “leaderless” variety represented by the recent extended presence at HemisFair Park that never truly sparked in San Antonio).

When in early Decmber local attorney Michele Petty (left, at MLK March on Monday) saw that no one had taken the lead to make sure San Antonio was represented in the planned national demonstrations marking the second anniversary of Citizens United being called for by Occupy-inspired movetoamend.org, she got busy. Groups like the local Sierra Club responded, forwarding the rallying cry far and wide (or at least Newsmonger got numerous invites from environmental interests).

“I went to their website to see who was doing it in San Antonio: zippo, nada. And there were only two others in all of Texas. I just said, 'You know what? I have to do it,” said Petty. “The only way we can get this done is by constitutional amendment. I've felt we needed to do that with corporate personhood for years and years and years.”

In fact, Petty's position as a frustrated attorney who has been faced down time and time again by companies benefitting from the court's acceptance of the belief in corporate personhood — where companies were able to hide information because of “attorney-client” privilege, with the company itself as the individual “client” — helped fuel her ire. Corporations, Petty said, have been working away for “decades and decades” to get equal status to human beings in courts of law. “These conglomerates not only have the same rights but because the way they are structured they wind up having the equivalent of more rights than an individual,” she said. “That corporation can shield so much of its activities and questionable goings-on by saying, 'OK, but we consulted with our attorney about this, therefore it's attorney-client privilege. That has been an ongoing problem in litigation for years and years. It's a miracle anytime an insider reveals that information and gets those smoking guns out.” With the stand on Friday, Petty expects good street theatre to capture Big Media's attention (who can resist giant dancing puppets?) and patriotic songs to stir the hearts of attendees. But ultimately the movement sprouting actions across the nation hopes to get a constitutional amendment on the books wiping out Citizens United now enabling the Super PACS to rake in virtually unlimited dollars for issue ads to sway votes. Cities across the country (such as New York City) have been passing resolutions calling for the end of corporate personhood and supporting the Move to Amend. San Antonio? Petty's got your resolution all drawn up:

--- For more information on how Citizens United affected political spending in the U.S., check out this Open Secrets report.