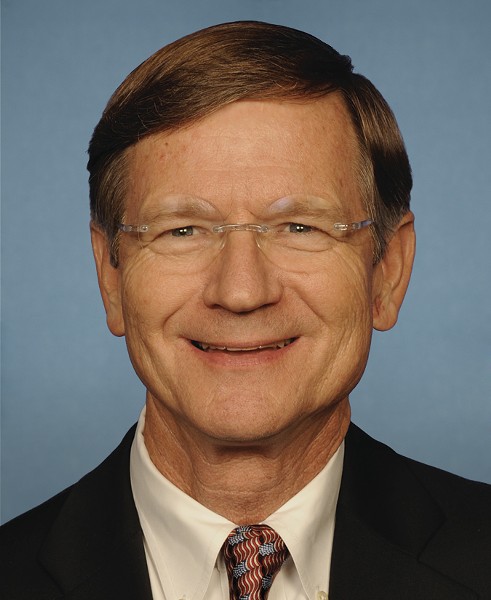 With a hearing mockingly titled "Holiday on ICE," Smith and co. continued to charge that the Obama administration has gone soft on immigrant detention.

Last month, ICE adopted new standards to apply across its sweeping detention network, reforms meant to improve access to medical and mental health care as well as access to legal assistance. The standards also aim to address standing concerns of sexual assault and rape of detainees by expanding the process to report abuse. Among other things, the new standards require strip searches be conducted by guards of the same gender.

At the start of Wednesday's hearing, Rep. Elton Gallegy (R-Calif) slammed ICE's revised standards as "part of an extensive public relations effort aimed at pro-amnesty advocates." He pointed to the newly built Karnes County Civil Detention Center (see "ICE's new 'soft' detention strategy"), about an hour drive southeast of San Antonio, as evidence of ICE's cushy new approach. Ironically, the new Karnes facility won't have to comply with the new standards since the feds didn't write it into their contract with private prison company the GEO Group, which will operate the detention center. Karnes, set to start taking in immigrant detainees this month, will operate under ICE's 2008 guidelines.

Following Gallegy's remarks, Rep. Zoe Lofgren (D-Calif) attempted to put ICE's revised standards in context, saying the snarky title of Smith's hearing trivialized documented abuse of immigrants, particularly of women detainees, inside the ICE's detention network. Lofgren recalled cases where immigrant women were raped by guards while being transported to and from detention facilities, along with those who claim they were sexually assaulted during strip searches.

The ACLU says it has tracked over 180 reports of sexual assault of detainees, 56 of which occurred in Texas detention facilities. Most recently, the ACLU sued ICE and private prison contractor Corrections Corporation of America on behalf of a transgender Mexican woman seeking asylum in the U.S. who landed in Arizona's Eloy Detention Center. In addition to guards calling the woman "faggot" and "dog," the lawsuit claims one CCA guard "forced [her] to watch him masturbate into a white styrofoam cup and then demanded that she ingest his ejaculated semen." (See also this 2011 Frontline report on sexual abuse in immigrant detention).

"Some of the detention reforms at issue today were adopted to protect female detainees from such horrors," Lofgren remarked at Wednesday's hearing. "I don't think it's a hospitality guideline to prevent rape of detainees, women who have done nothing wrong, and to prevent death and abuse of detainees in custody."

She added, "Throughout this Congress we've seen elements of what I think of as a sort of Republican war on immigrants. In today's hearing I'm afraid we're starting to see where that war meets the Republican war on women.”

Along with sexual assault, Lofgren also pointed to cases where immigrants died in ICE custody due to lack of medical care, like the troubling case of Salvadorian immigrant Francisco Castaneda, who complained for months of a lesion growing on his skin while in ICE custody in a San Diego facility. Castaneda, who ultimately died of cancer, was denied access to a doctor for some 10 months. A federal judge in 2008 called Castaneda's case "one of the most, if not the most, egregious Eighth Amendment violations the Court has ever encountered."

Still, one of Smith's largest concerns Wednesday was the expansion of the complaint process for immigrants in detention. "To make matters worse, the new standards expand a complaint process against ICE officers and facilities," he said. "It offers numerous avenues for complains, unlike the [federal] Bureau of Prisons, which has a single streamlined process." He called the new standards "biased against ICE agents," fearing reforms might subject the agency to "constant and frivolous lawsuits."

A number of other stakeholders and experts were called to testify Wednesday, including Jessica Vaughan, policy director for the anti-immigrant think tank the Center for Immigration Studies. "As in any large detention system, abuses occur and are dealt with," she said. "But at this point, the people who really need a hotline and special advocate are the ones who have been the victims of illegal acts committed by illegal aliens." She advocated housing more immigrants in local corrections facilities, while criticizing new measures to increase detainees' access to legal advocates and human rights groups. (You can see Vaughan's and others' full written testimony here.)

Reading from his own prepared statement, Smith continued to call the new measures "a hospitality guideline",  charging they were drafted and adopted without ICE officers' input and relied overwhelmingly on feedback from "pro-illegal immigrant groups."

"Under this administration detention looks more like recess," Smith said.