The hottest-coolest place to be on Friday, May 18 is attending Bill Sinkin's 99th birthday luncheon. Sinkin is a San Antonio icon. He is a community leader, environmental activist and businessman. And, I know he would want me to add, staunch Democrat. He's also the founder and chairman of Solar San Antonio, a cutting edge nonprofit organization making solar energy a major contributor to the creation of the new energy economy. The party begins at 11:30am at the Pearl Stable, 312 Pearl Parkway. The program will showcase the progress Solar SA has made in our city--which is considerable. Tickets are $99. Make your reservations here. Follow @solarsanantonio  and 'like' their Facebook page. The very next day, Saturday, May 19, is Armed Forces Day. In conjunction with the City of San Antonio and the Paseo del Rio Association, Operation Homefront will present the Salute to our Heroes recognition concert following the Here’s to our Heroes Military River Parade. This concert is free of charge to military personnel, their families, and all patriotic Americans who support them. 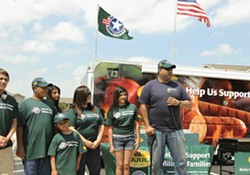 This event is being held at UTSA's Institute of Texan Cultures in Hemisfair Park, Downtown San Antonio and begins at 4:00pm. Country music star Tracy Lawrence is the featured entertainer, but there will be special guests Steve Holy, Glen Templeton, Angie Johnson (2011 Contestant from the hit show The Voice), and Dan Evans (Country Music Singer and Contestant from the hit show The Biggest Loser). see the flyer Both of these organizations do enormous good in our community. Support them in any way you can.   San Antonio activist and nonprofit veteran Laura Carter believes in enabling the community to work from the heart, not just the wallet. During her time at the San Antonio Area Foundation, Laura implemented new technology, managing website design and content for all published materials. She introduced multimedia and social media into the communications plan, increasing the community's participation in the Foundation's programs. She is currently Communications Director at Providence Catholic School. Photos courtesy of Solar San Antonio and Operation Homefront.