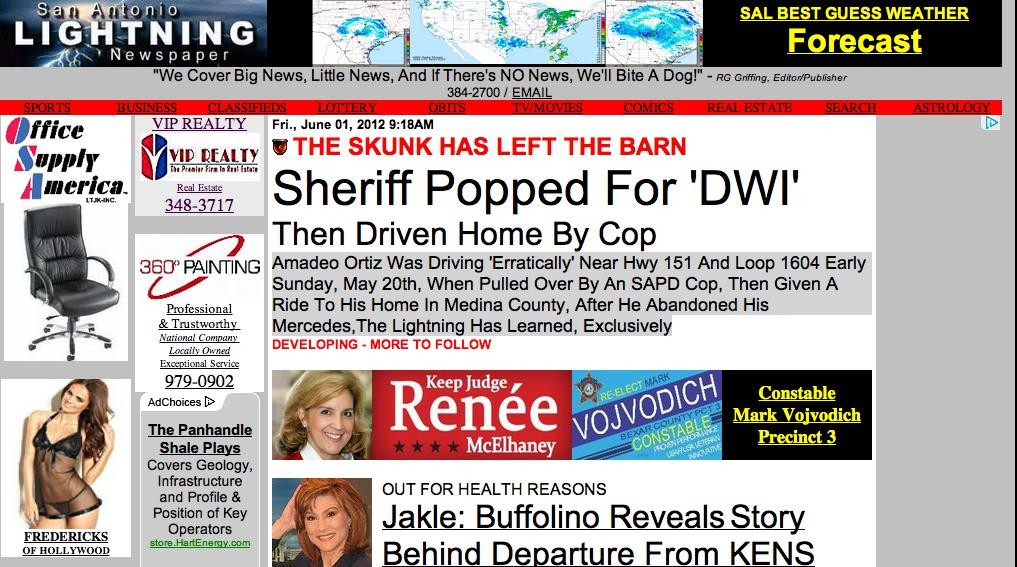 But Griffing gets downright giddy when he spots a fight. Last year he found one in District 9 Councilwoman Elisa Chan when a constituent caught her on tape telling a Northside homeowners association she could help quietly funnel hundreds of thousands in city cash toward a private project. After the minor scandal hung in the air for weeks Griffing filed a city ethics complaint against Chan, and, when the matter went up for a hearing, Griffing started a shouting match with members of the city’s Ethics Review Board — the complaint was thrown out.

Griffing this week found another fight. True to form, the headline scrawled across his site Thursday was striking: “Sheriff Popped For ‘DWI’ Then Driven Home by Cop.” He continued, “Amadeo Ortiz Was Driving ‘Erratically’ Near Hwy 151 And Loop 1604 Early Sunday, May 20th, When Pulled Over By An SAPD Cop, Then Given A Ride To His Home In Medina County, After He Abandoned His Mercedes, The Lightning Has Learned, Exclusively.”

A spokesman for Ortiz, who faces Democratic challenger Andy Lopez in a July 31 runoff election, issued a statement late Thursday to quell rumors after receiving “many media inquiries into an allegation of wrongdoing committed by the Sheriff.” Ortiz, the statement says, was home at the time of the supposed incident. Moreover, it says Ortiz doesn’t even own a Mercedes. A spokesman with SAPD says they don’t have any reports on file or information on a traffic stop involving the Sheriff on May 20.

When reached yesterday, Griffing insisted he’s not backing down, saying he’s confident in his sources (he of course won’t spill who they are). As of this morning, he has yet to take the story down or update it with the rebuttal from Ortiz’s office.