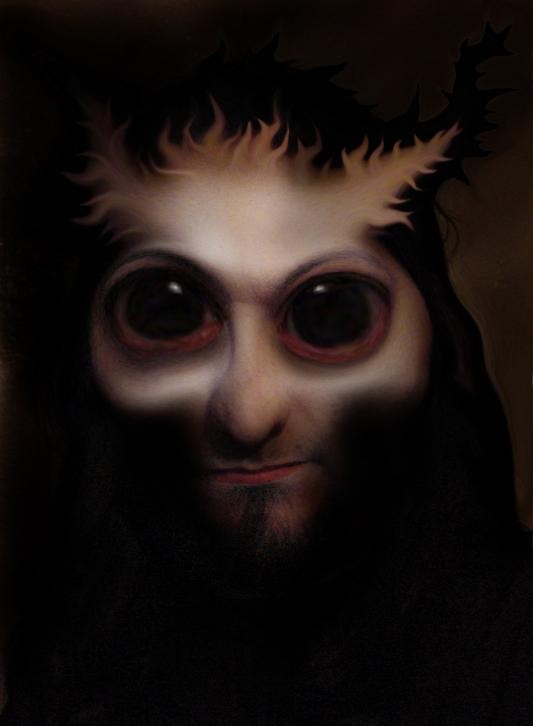 El Cucuy Self Portrait by eyetooth7

‘Tis the season when strange things go bump in the night and all manner of scary beasts creep and crawl through moonlit graveyards. Yet, perhaps no goblin is more symbolic to South Texas than the Latino boogeyman known as El Cucuy. Like most urban legends, there are many interpretations to this myth. Though the prevailing image is that of a diminutive, hairless creature with an enormous head that dwarfs his spider-like body. Include large, glowing eyes, razor sharp fangs and claws and it makes for a spine-chilling image. Over protective mothers warn their children not to stray too far from home, or else they might fall prey to El Cucuy,

One account I’ve collected from the small, Texas town of Dickens causes one to wonder if there may be a grain of truth behind the stories. According to her testimonial, a young, female student was driving home alone one evening during 2006, when she noticed a goblin-like creature crouched on top a fencepost outside of town. The witness later described the thing as being about three-feet tall, with a sloping, round head like an owl, large, slanted eyes and a tiny nose and mouth. The monster’s peach-colored skin was wrinkled like a bat and it appeared to have short, stubby arms with flaps of skin resembling malformed wings. It’s feet resembled talons. As the woman watched in abject terror, the bizarre being hopped off of its perched and scrambled around on the pavement in front of her car. This was understandably more than she could bear, and the young woman sped home with tears streaming down her face. She was apparently in a state of hysterics when she burst through the door and informed her mother about the encounter.

In still another instance, a gentleman from San Benito once told me that he had heard noises emanating from a garbage dumpster one evening and as he watched in amazement a “little, hairy vato” emerged from its opening and scampered away on two legs.

All things considered, we can’t discount the possibility that something called El Cucuy is really out there somewhere, lurking in the shadows.