July 18, 2013 at 11:00 AM
comment
A change in mascot appears to be in San Antonio College's imminent future, though according to Public Relations Officer Julie Cooper, though “it's not a done deal.” The Ranger had become a figure of much controversy in recent years as, historically, Mexican-Americans were treated quite poorly by the Texas Rangers. SAC has been looking to move away from this symbol of racial tension for some time, and it appears that progress has been made, albeit in a very strange direction. 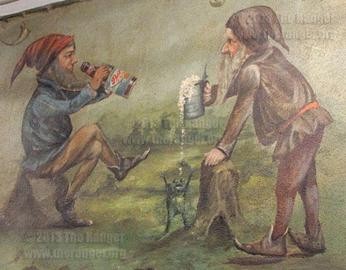 A replacement figure is in the works, known for now as the “gnome ranger.” Yes, a gnome. That strange, misshapen little man from European folklore who lives underground. The inspiration from this figure comes from paintings of such creatures found in the nine-pin bowling lane in the basement of the Koehler Cultural Center, first built in 1901 as a home and predating the college for almost a quarter of a decade. The gnome is both historically significant and a fun, whimsical departure from all that bad press surrounding the Ranger.

There is, of course, much opposition to this move, as some on campus find this new figure outlandish and unrepresentative of the college and its students. However, nothing has been decided as of yet and the college has been having open discussions on campus for its students to have an honest communication about the possibility. “It was just a suggestion put forth by some members of the administration,” said Cooper, for now “as far as the college is concerned, the figure of the SAC Ranger still exists.”