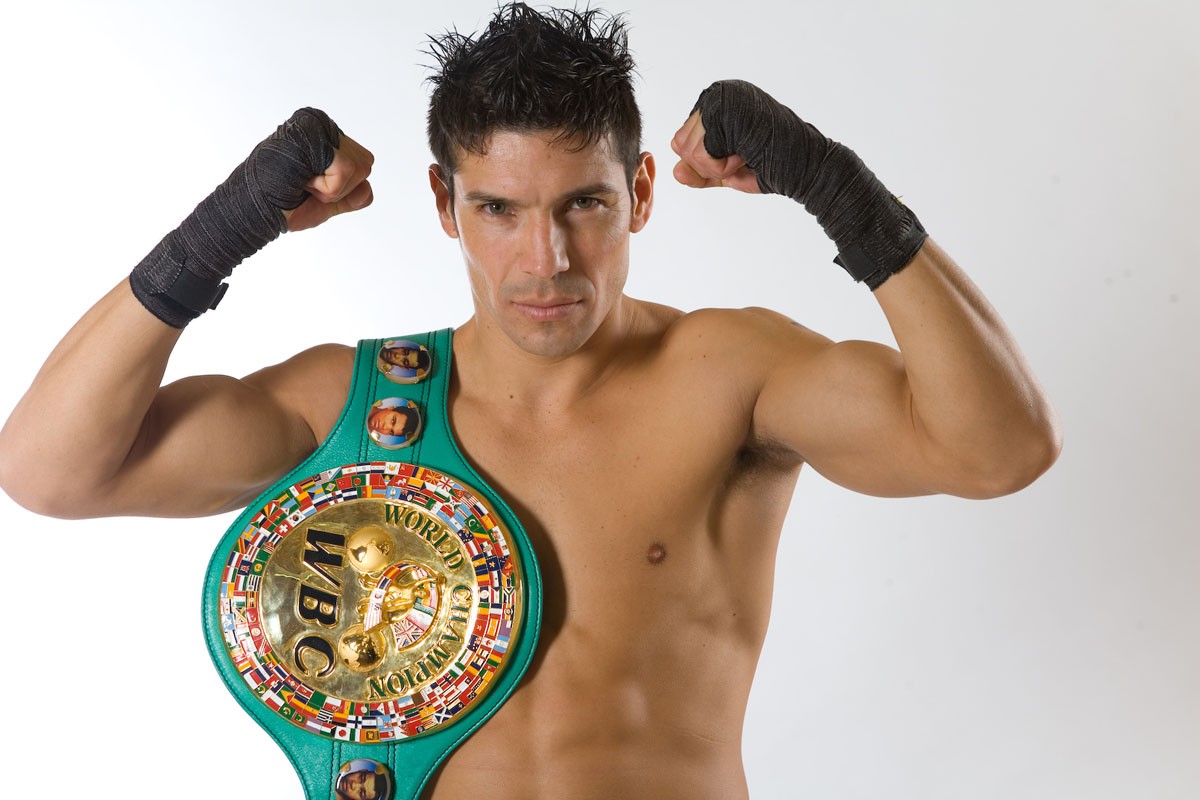 Considering the large Mexican and Mexican-American population in San Antonio, this is another strange decision on the part of People En Español: last year, the magazine invited Puerto Rico’s Miguel Cotto, who had destroyed Mexico’s Antonio Margarito in a rematch. Now, the magazine invites Martínez, who gave a boxing lesson to Julio César Chávez Jr., the son of Mexico’s greatest boxing legend ever.

Questions notwithstanding (we understand, say, Canelo Álvarez wasn’t available, but aren't there any other great Mexican boxers available? Isn’t Juan Manuel Márquez a Mexican?), Martínez’s visit is an appealing one: he’s one of the world’s best pound-for-pound boxers (unofficially ranked at number seven by The Ring magazine, after years in the top three, just behind Floyd Mayweather and Manny Pacquiao), he’s smart, has great charisma and is always entertaining.

Martínez is a rare case of a 38-year-old man capable of competing at sport’s highest levels in spite of his age. It is a testament to his work ethic, discipline and his natural athleticism. But recent injuries and questionable performances in his last two fights will keep him out of the ring for the rest of the year, and some believe his career is in its last stages.

To make a long story short, doubts started after his fight against Chávez Jr. on November 2012 in Las Vegas: after Martínez outboxed and outpunched the Mexican for 11 and a half rounds, Chávez dropped him with two ferocious left hooks with less than 90 seconds in the last round. Instead of clinching or running (all Martínez needed to win the fight was to remain on his feet), he bravely fought back. He won a big unanimous decision, and after the fight it was announced he had broken his left hand and one of his knees. Seven months later, he returned to fight England’s Martin Murray in Buenos Aires, his first fight back home since 2002. He won a unanimous decision but was knocked down in the eighth round, and questions about his future remained.

In order to understand the current state of Sergio Martínez, it is necessary to go back in time. In mid-July, Martínez spoke with the Current on the phone from Madrid, Spain (where he resides) and he left no stone unturned.

After three years fighting in Argentina, you made your U.S. debut in 2000 and were knocked out by Antonio Margarito in Las Vegas. After that fight, you moved to Spain, resumed your winning record and returned to the States to suffer two disputed verdicts: a draw against Kermit Cintrón (the referee had stopped the fight but changed his mind when Cintrón protested) and a split-decision loss against Paul Williams, a bout many thought you won. Were those fights discouraging or they motivated you even more?

The only think I thought is that I needed an opportunity. I knew that, if only given a chance, I was going to make the best of it. The verdict in the Cintrón fight was lamentable, but the first Williams fight was a lot more even.

Just before the Margarito-Mosley fight, it was discovered that Margarito had illegal padding under his hand wraps and was eventually suspended. Looking back, do you think he may have used any illegal material in his fight against you?

Your 2010 fight against Kelly Pavlik was your first great victory in the U.S., but the rematch against Williams was your great moment and you left no doubt as to your quality as a boxer. It was a tremendous left hand, unanimously chosen as knockout of the year.

That punch was my authority statement; with that punch I sealed the deal. It was the greatest moment of my career.

After the Chávez Jr. fight you went back to Argentina to fight Martin Murray. You kept on saying you were in top shape, yet it was very obvious in the fight that that wasn’t the case.

Nowadays, title fights are pretty even. It’s very difficult to find great difference between the fighters. Murray was no bum and I knew I would have to work very hard. Plus, on that day there was 100 percent humidity, it rained the whole day, and that played against me. I prepared extremely carefully, we took care of every detail, and I may have over-trained a bit. There were weather-related details we could not control. A normal body is going to feel more pain than usual, but a physically beat-up person like me will feel it a lot more.

Many in Argentina felt disappointed with your performance, they were expecting more, and people like Juan Martín Coggi [Argentina’s former three-time world welterweight champion and the center of one of the biggest robberies in the history of boxing] even called you a “marketing product,” “arrogant” and a “liar.”

I always consider where the criticism is coming from. I can’t become arrogant when they praise me, and I can’t become discouraged when they attack me. It’s a very well-known fact that, as soon as you become successful, there will always be a mediocre group of people waiting for you to trip, waiting for a margin of doubt, to expose their own frustrations. I received criticism from people I would have never imagined, and heard things I would have never imagined. It’s like in soccer, you step on the ball and someone steals it from you. “It was my fault, I didn’t see him coming.” [The critics] were waiting for me to trip to roll over me.A lot has been said about that fatidic last round with Chávez Jr. But both against Chávez Jr. and Murray, you basically fought with one hand and one leg. You were ahead on the scorecards and could've stopped fighting, yet you continued.

The body sometimes betray you: you break a bone and everything gets complicated. But I need to try to overcome that. If I start saying that, some will say I’m trying to look for excuses.

Do you feel you have a lot to prove again, as in the second Williams fight?

More than anything, I have things to prove to myself. I’m not happy with the Argentina fight, I’d feel better if my body had responded better. What I want to do is fix my body 100 percent and be like I was before. My body just couldn’t take it anymore. So now I want to prove things to myself and continue achieving things.

I’m going to throw you three names. Tell me the first thing that comes to your mind.

A good [fight] option, and the future best middleweight champion.

A very great project. I hope he doesn’t fade away if he loses against Mayweather.

The best pound-for-pound boxer in the last 10 years, easily.

They’re all more or less around your same weight. What are the real chances you’ll fight them?

Yes, we’re all in close divisions. Mayweather is more like a welterweight, and Canelo is superwelter. Golovkin and myself, we’re middleweights. But all these fights can be made in an intermediate division.

Did you see Golovkin-Macklin? [Golovkin KO’d Macklin with a body shot in the third round, while Martínez beat him in the 11th after Macklin’s corner stopped the fight; after the fight, Macklin said “Sergio Martínez is my friend, great fighter, but Golovkin is way better”]

Yes, I saw it. Unfortunately for Macklin, the pressure of the fight, knowing that Golovkin is too strong, was too much for him. The type of fight Macklin fought on that night made him unrecognizable.

Will you fight in Argentina again?

The desire is always there, it was packed, you couldn’t fit a needle in the stadium. I want to do it again, but on doctor’s orders I can’t fight until April or May 2014.

All big fights? How many and against who?

I have two more fights with HBO Sports, so it’s a matter of deciding whom to fight. That TV issue is very delicate. You have HBO Sports on one side and Showtime on the other. If I want to fight Canelo or Mayweather, it’ll be difficult because they belong to Showtime and I’m with HBO. So the first thing is that my team find fighters we can put on TV. But they must be first-class champions. Otherwise, I wouldn’t be as motivated, and that’s very important for me.

It dawned on me the other day that your career started suffering when you began appearing on TV shows, doing stand-up, and publishing a [motivational] book [Corazón de rey]. Something similar happened to Oscar De La Hoya, who started to lose after recording an album, and to Manny Pacquiao, who became a singer and a politician. Aren’t you worried that something similar may happen to you?

No, because I don’t do too many things. But whatever I do gets a lot of publicity. I’ve been writing for many years now, but my focus remains the same. In the last three years I kept on training eight weeks before a fight, very hard training, better than ever, in spite of some pain I may have, which is logical on any high-level sportsman. Injuries and pain are constant. But as soon as I lose one percent of concentration, that day I will lose everything. So far, that hasn’t happened. But my age and the accumulation of injuries are important factors.

It’s logical, isn’t it? No matter how well you say you are in 2014, your body won’t be the same as the one you had in, say, the Williams fight.

Precisely, that’s why this week [mid-July] we start a new treatment to improve my knee, which is one of my most fragile points. I already have two surgeries on me and I need to see if a third is needed. Three surgeries on one point is very tough, especially on the knee. But my doctor and I are very confident that everything will be alright. Some injured areas won’t heal 100 percent, but we’ll try to reach 99 percent.

How’s the left hand you broke?

The hand is fine, it was the area that suffered the least. It was just a bone that was fractured. The shoulder and the knee were more complex. I haven’t trained since my last fight.

I have a very strange relationship with Mexican fans: I’ve never met a Chávez Jr. fan, even though I travel to [Mexico City] very often. But, really, everyone in Mexico always greets me wonderfully. If I see [seven-time, four-division champion Juan Manuel] Márquez [currently ranked as number three pound-for-pound boxer by The Ring], for example, or with Margarito, or any other boxer, we see each other as equal. We’re all professional and we do the same job. But I love Mexican people and they treat me excellent.

The truth and nothing but the truth: I still believe that, in your division, you’re unbeatable as long as you fight with two arms and stand on two legs. So, how fit will you be in 2014?