Titstare, Brogrammers and Donglegate: 10 examples of sexism in tech

September 20, 2013 at 10:10 AM
comment
Perhaps you saw our article about FemTechNet, which strives to include women and feminist theory in the greater discussion about technology, and thought to yourself "Meh, show me some sexism in tech and maybe I'll pay attention."

"Orly?" - Grace Hopper (deceased), creator of one of the first programming languages

1) According to the Grey Lady (traitor!) a.k.a. The New York Times:  "Men invented the internet"

2) But seriously, the actual NYT article was reporting on a sexual discrimination lawsuit brought by junior partner Ellen Pao against her then-firm in Silicon Valley's ball sweat-filled venture capital world.

Men like to look at breasts. Cool story, bro.

3) What do you call it when you walk into a place, and all the people there are either dudes or scantily clad women? A strip club? Nope.  A pool party? Nope. A co-ed indoor volleyball tournament? Nope. Try a tech conference! Yikes. That environment is to sexism what a hot tub is to venereal disease, apparently. Just check out these eight examples of ick compiled by the folks at Mother Jones. An app for dudes looking at breasts. Check. Booth babes. Check. Taiwanese lap dancers. Aaaaand ... Check.

4) Don't you just love it when your Chief Technology Officer turns out to have a wildly misogynistic and racist not-so-private Twitter account? Business Insider did not love it, ultimately. But they sure tolerated it long enough! In Pax Dickinson's sleazy defense, he was just doing it for the lulz, so he says. Somewhere Archie Bunker's ghost is trying to make the #standwithPax hashtag a thing. 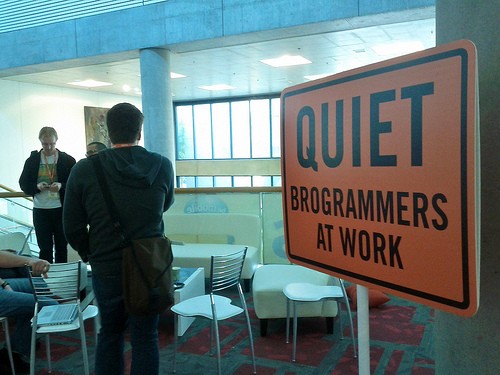 5) Beware "culture fit," a term used by startups to turn down hopeful job applicants based on the fact that they might otherwise be a good hire but just don't fit the culture. Totally normal. But when that culture is predominantly male and white, well, then it starts getting a little country clubby. And when's the last time you went to a country club? Did you not go because it was old and boring and exclusive? Is that what you want for the tech industry?

6) On second thought, maybe country club isn't really so far off the mark...

7) Should you be an extraordinary woman in technology, you best be prepared to get rape threats, and worse, which is what happened to Kathy Sierra, once a keynote speaker at SXSW Interactive, who was driven into hiding after making the unpopular suggestion that blog comments be moderated.

8) Should you be a non-extraordinary (yet well respected) woman in tech, you best be prepared to get rape threats, and/or get fired, which is what happened to Adria Richards. During a Python coding event this year Richards tweeted a complaint about two fellow conference attendees making obnoxious sexual jokes, one involving the word "dongle". A giant Twitter-fueled meltdown now known as Donglegate, which included both one of the offenders and Richards getting fired, ensued.

9) Should you be a non-extraordinary woman not even in tech, you best be prepared to get rape threats, and worse, just for being a woman online. Sixty percent of cyberstalking victims are women.

10) Still not convinced? Check out the 937 instances of "sexist instances in geek communities" on this feminist wiki.