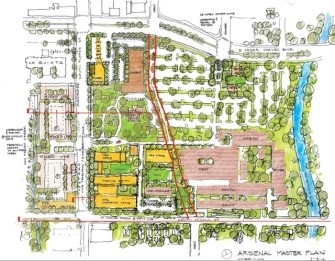 This afternoon, San Antonio City Council approved a measure that would allow the construction of an H-E-B grocery store downtown. The vote also greenlights the closure of a portion of South Main Street, between César Chávez and Arsenal Street to make way for the locally-based grocer. The issue elicited debate and opposition from members of the community, who argue the plan would fragment downtown connectivity, hinder SA's urban core and granting public property to corporate interests.

"Mayor Julian Castro said he understood concerns of the residents affected by the Main Street closure but the chance for economic development was worth the investment. Similarly, District 1 council member Diego Bernal showed excitement, saying the deal today was not the same as the initial plan– a considerable amount of compromise had been struck. District 8's Ron Nirenberg recused himself because his wife works for the grocery company. District 4's Rey Saldana recused himself as well.*

“We have on the table an opportunity to create a significant number of jobs in the urban core of the city and create a grocery store that I believe will further catalyze the revitalization of downtown,” said Castro.

In an indicator of today's approval, the City's Zoning Commission approved rezoning an area to allow H-E-B to build a gas station alongside its proposed grocery store on Tuesday, a major component of the plan.

One point of contention has been job creation, as the grocer was slow to produce a figure showing how many new jobs the new store would create. The City's Development Office says H-E-B will employ 800 workers by 2020 and an additional 800 employees by 2030– 50 percent of these will be new jobs, they say.  The grocer also vowed a $75 million investment in their downtown campus by 2020, with money flowing toward its culinary school (under construction), test kitchen, multi-level office building, parking garage and proposed downtown grocery store.

As for pedestrian and bike paths–H-E-B promises to make traffic improvements (such as enhancing pedestrian signals and crossings) create a 30-ft. pedestrian and bike amenity zone, re-open Whitley and Dwyer Streets, ensure ADA-friendly walking paths, arrange VIA transit to drop off at the Commander's House, and replace or preserve the bike route and pedestrian path through S. Main Ave. However, some who testified weren't completely satisfied with these proposals; one testifier flat-out described the traffic study as "a sham."

While some groups like The King William Neighborhood Association initially opposed the street closure, they've since changed their minds. The KWA dropped their disapproval after the board of directors voted 7-6 to OK the measure in late November. In a release, the KWA said they came to their decision, "based on the information provided and the mitigation solutions" offered by the grocer and the City's traffic study.

A KWA member voiced the group’s approval at the council meeting, but also pointed to lingering concerns. They recommended using the $3.5 million allotted for street closure fees to be earmarked for infrastructure improvements, sidewalk and street repair and additional lighting to Arsenal to S. Alamo street for those directly impacted. They also noted inconsistencies surrounding bike paths between the presentation given by H-E-B and the actual development agreement and lastly, they urged the grocer to add an expiration date clause to the gas station, as they grocery store is only guaranteed to operate for at least five years.

Meanwhile, other residents, businesses and local organizations in the area steadfastly oppose the 10,000 square-foot downtown grocery store, centralizing their displeasure on MainAccess.Org, a channel for mobilizing activism against the plan. The Main Access group argue that if a portion of S. Main Ave is privatized, they would lose an, "important north-south connection, particularly for pedestrians and bike riders, in order to have virtually no improvement for downtown's grocery store situation."

KWA resident and Main Access member Charlotte Luongo detailed the problems associated with the build in an Op-Ed for the Current's November 6 issue. The group touts nearly 2,000 signatures on their online petition against the street closure. During the council meeting, Luongo delivered the petition to council today, saying, "these citizens are angry, they know they have been disenfranchised [

] they know the city is no longer a democracy, it is being run by corporate interests." Luongo said the push to approve the H-E-B plan amounts to "extortion" and cautioned that her and many others may exit the City for its decision to "undermine" the features that drew her and hundreds of others to San Antonio in the first place. Echoing Luongo, downtown resident of 40 years, James Rodriguez said the City is being subject to fear by H-E-B– hanging over their heads is the threat of the major private employer's exodus if council members fail to approve the grocery store plan.

Opponents of the plan argued the City is being bullied by H-E-B, the largest privately-held company in Texas and the employer of more than 20,000 San Antonians. The retailer is consistently ranked as one of the country's top private companies and led by the ultra-wealthy philanthropic (to both charities and political coffers) Charles Butt– meaning all the more pressure to OK a project, however controversial. Opponents also vocalized a lack of public input and an unfair prioritization of development and corporate desires. Yet, supporters believe the job creation numbers brought to the inner city and the store's fit into to the SA2020 downtown plan override criticisms.

*This article has been changed to reflect that Nirenberg and Saldana recused themselves from the vote. Updated 12/5 2:11 p.m.