10 Most Newsworthy Local Stories of 2013

While top-level CPS energy executives enjoyed millions in bonus pay, the city-owned utility unabashedly asked customers to cough up extra cash for monthly electric bills—on top of the request, critics described the average $5.19/month as a low-ball estimate sure to strain the wallets of poor customers. Looking out for the middle class, social justice advocates called CPS out, forcing the company to lower the rate increase, restructure their bonus incentive program and invest in low-income customer outreach, reminding us sometimes pushback pays off.

Two same-sex couples recently filed a federal lawsuit to overturn Texas’ 2005 ban on marriage equality. While the story is still developing and will likely make headlines come 2014, it’s worthy to note that the case has SA roots galore—the couples have all lived in San Antonio at some point, their lawyer is based in the city and the case itself is being heard in U.S. District Court in San Antonio. Stay tuned.

8. Gun-Rights Enthusiasts Gather at The Alamo:

Garnering national attention, Second Amendment-loving Texans congregated at the Alamo in October to flex their Constitutional rights in a “family friendly,” loaded guns-optional open carry rally, making the rest of us a bit uneasy (or at least, hesitant to venture downtown.)

Considering it an affront to cultural heritage and historic preservation, grassroots activists rallied to block the demolition of the Univision station building downtown, the first Spanish-language TV station in the country. The sit-in led to eight arrests and a request for an investigation into the development deal. When community advocates are willing to get thrown in jail for their values, you can’t deny that the spirit of activism is alive and well in SA.

6. H-E-B Gets Its Downtown Grocery Store:

To the disappointment of thousands of community residents, City Council agreed to close off part of South Main Avenue to allow the locally based grocer to plot its latest store and expand its Arsenal-area headquarters. While proponents are jazzed to have access to fresh fruit downtown—and hundreds of new jobs—some citizens say the deal was conducted with little public input and transparency and that the resulting proposal disregards their livability concerns and disrupts the urban core.

Duping dozens of women and men (some as young as 13 years old) via bogus promises of a celebrity future, the San Antonio-based faux-reality TV producer and modeling agent was finally charged with a combined 39 counts of bank fraud, extortion and distribution, transportation and receipt of child pornography. Slapped with an 898-year sentence, the local charlatan’s trail of destruction came to an end in 2013.

During a House Armed Services Committee hearing earlier this year, a flood of victims alleged sexual misconduct by fellow Air Force members and accused leaders of allowing sexual abuse to run rampant with no accountability. Air Force officials admitted to their minimal effort to correct the wrongs—while the testimony helped expose the abuse, only time will tell if the Lackland Air Force culture of victim neglect will cease. This month, U.S. congress passed a bill designed to rectify the military’s handling of sexual assault cases, but critics say it’s scope is too limited. 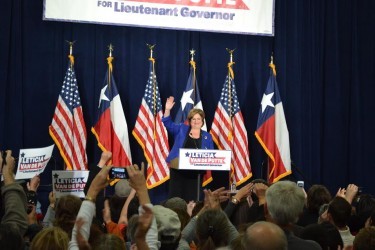 In a highly anticipated campaign, SA’s own Van de Putte officially made her bid for lite guv in a packed gymnasium at San Antonio College, delivering a Populist-themed speech geared toward helping middle class families, veterans, students and women.

Joining her friend and colleague, state Sen. Wendy Davis, at the top of the Democratic primary ticket, the local rep’s announcement elated supporters and pro-choice advocates—we can, after all, credit the women’s health champion with giving us perhaps the most memorable (and empowering) Texas-based quote of the year while fighting against Texas’ restrictive abortion law on the Senate floor: "At what point must a female senator raise her hand or her voice to be recognized over her male colleagues?”

After more than a decade behind bars for sex abuse crimes they say they did not commit, Elizabeth Ramirez, Kristie Mayhugh and Cassandra Rivera, three of the four women known as the “San Antonio Four”, exited from prison, hand-in-hand with tears streaming down their face (Anna Vasquez, paroled last year, joined her friends), creating one of the most emotional moments in 2013 for the San Antonio community. While a new Texas law helped secure their release, full exoneration awaits.

In a major victory for municipal LGBT rights, City Council approved a measure granting gay, lesbian, bisexual and transgender residents equal protection when it comes to job hiring, firing, public accommodations, housing and city employment and contracts as well as board and commission appointments by adding “sexual orientation” and “gender identity” to the City’s anti-discrimination code. But the win for equality came only after months of heated protest, one very public controversy and hours of debate from both sides. It also came with a price—shortly after its passage, churches sought to block the ordinance with a referendum petition, while that effort failed, a similar effort mounted by right-wing conservative groups is meant to recall all council members supportive of the ordinance. Taking to the streets to unseat all who cast a ‘Yes’ vote, the anti-LGBT activists have until early next year to secure the signatures. In the meantime, equality advocates can look back at 2013 as the year when San Antonio finally progressed in its previously stunted mission to secure gay rights.