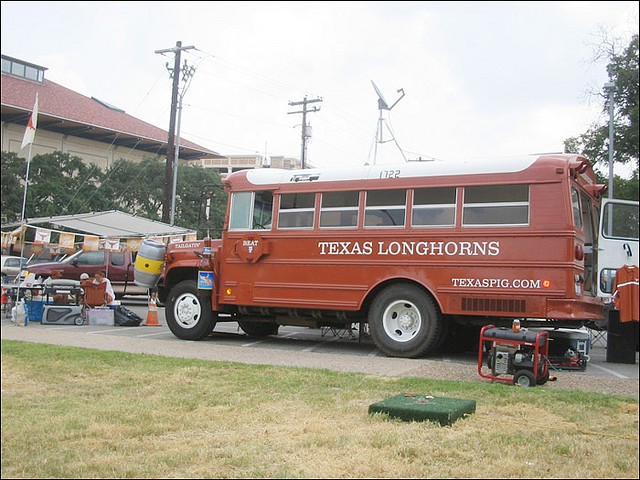 Tailgate essentials, via Megan Ann on Flickr More than 65,000 University of Texas Longhorns and University of Oregon Ducks fans will flock to the Alamodome December 30 for the 2013 Alamo Bowl. Before the two teams from the Big 12 and the PAC-10, respectively, collide on the gridiron, fans will pack the Dome’s parking lot to grill a myriad of foods, consume ice-cold beverages, and generally show San Antonio how tailgating is done. Stefan Cich, an engineer at Southwest Research Institute and a UT alum, provided the Current with 10 essentials new and experienced tailgaters will need during the festivities.

10.  Generator Most tailgate spots will not have access to a power source. A generator always comes in handy, whether it is used to charge cell phones, play music or power some important tailgating equipment.

Tailgate TV, via karindalziel on Flickr 9. Television and satellite dish The number one reason to have a generator for tailgating is to power a television or satellite dish. You know, so you don’t miss any of the other sports events happening while you drink beer in the parking lot of your own big game. [Editor’s note: tailgating is so weird!]

8. Tent On a scorching summer day, or an extremely sunny day, a tent (with your team’s logo, preferably) can provide necessary protection and also acts as a nice spot for people to mingle. I know it’s January, but this is South Texas we’re talking about.

via Library of Congress on Flickr 7. Chairs Depending on how intense of a tailgater you are, standing for four-plus hours can be exhausting. Sometimes you just need to collapse in a chair and watch the other games happening that day.

6. Football One of the most important aspects of tailgating is keeping yourself entertained. [Editor’s note: possibly because standing in a parking lot for several hours is boring?] A simple and cheap way is to recreate Heisman moves with the ole pigskin and some buddies.

5. Lawn games Lawn games bring out the competitive spirit out of everyone, usually in a good way. They are also simple enough that you don’t have to physically exert yourself too much. During a long day with lots of food and alcohol consumed, running around is not always the best idea.

4. Team gear While it is not the most important thing to display at a tailgate, it’s always good to let people be aware of who you are cheering for. This will either bring shouts of cheers or jeers, but either way, supporting your team with as much gear as possible will be noted by the mascot god of your choice when you ascend to college football heaven.

3. Grill/smoker and meat One of the best tailgating experiences is the smell of charcoal, mesquite and burning meat. If you truly want to tailgate right, having plenty of food to cook during long hours out is essential. One of the best ways to make new friends is to invite them over and allow them to taste your delicious barbecue.

via slgckgc on Flickr 2. Adult beverages The second most important thing to have at a tailgate is beer or whatever your preferred poison is. One of the simplest tailgates is a few friends, a cooler full of beers, and just being able to enjoy the outdoors with fans of both schools.

1. People Nothing is more important than being able to tailgate with other people. Being around family, friends and even people from rival schools is always necessary when having the ultimate tailgating party. Otherwise, you’re just standing in a parking lot, drinking by yourself. [Editor’s note: Really boring.]   (Related Story: Beyond Sports Bars: Three spots to watch the Valero Alamo Bowl)