Why You Should Join the Bone Marrow Donor Registry 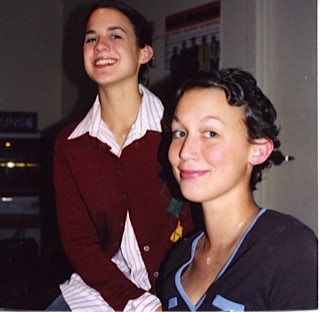 Callie (left) and her sister Alaina between transplants

Tonight, local rapper Kusha Tarantino will host a jam-packed hip-hop bill at Fitzgerald's. When James Courtney first pitched me an article about the show, I wrote back "fastest way to my heart!"

That's not because I particularly love Kusha, (though he seemed like a smart, passionate guy in the subsequent article James wrote) but because I fully support the concert's secondary mission: signing people up for the National Marrow Donor Program.

I myself have donated marrow once and stem cells once (these are two different methods to get the same type of cells into the patient in need). Both times it was a treatment of the last resort for the patient, my sister Alaina, who spent several years in her late teens battling a particularly aggressive form of leukemia. Sadly, my donations did not save her life, but they did prolong it. Without the marrow and stem cell transplant, Alaina wouldn't have been well enough to leave the hospital and recover at home. She wouldn't have lived long enough to graduate high school and apply to college. For many other patients (typically those with blood disorders or blood cancer), the transplant does save their life.

Signing up for the marrow donor registry, which you can do for free tonight at the Kusha Tarantino show thanks to the organization LOVE HOPE STRENGTH, is absurdly easy. They swab your cheek to get your DNA, and then send it off to NMDP where they'll scan in for human leukocyte antigens (HLA). When a patient in need of a bone marrow or stem cell transplant can't find one in their own family, doctors turn to the registry to find a donor.

This is the part that makes people nervous. "What if they call me?" people ask when I tell them about the registry. Well, a) you can always decline (odds are 1 in 540 that you'll get called to be a donor sometime in your life if you're on the registry) and b) the donation is also pretty easy, especially consider the end result is generally life-saving, or at least life-prolonging. I'm in a unique position to tell you about both, so here it goes:

Bone Marrow: This is an outpatient surgery. Don't worry, in both cases you have several weeks to prepare, it's not like they call you and tell you to be in surgery prep the next day. A doctor in your city or nearby will help you through the process and work with you to schedule the surgery date. I was in and out in one day, and the surgery had general anesthesia, so I don't remember any of it. They extract the marrow with a needle from your hip/pelvis area. Afterward, I felt a little sore there, like I had fallen and bruised my tailbone. I had two teeny tiny scars that are no longer visible. The soreness lasted for a few days, and in about a week I was feeling normal. I was in college at the time and donated over spring break, so I didn't have to worry about taking off of work or school, but I'd probably recommend taking the next day off, if only because it hurts to sit down in a chair for 8-10 hours. Standing desk or working from home? No problem.

Peripheral Blood Stem Cell: This is a non-surgical procedure. As in bone marrow donation, a doctor will work with you to prepare and schedule your appointment. Unlike bone marrow donation, for five days leading up to stem cell donation you have to take some injections that boost your stem cell count. About the only side effect from that I can recall were some low-grade headaches. The donation itself can take about eight hours or less and is fairly similar to donating blood or platelets, except for during the donation, they take blood from one arm and separate out the stem cells, then put your own blood back into your body via the other arm. So, both arms have needles in them and you can't do very much except watch movies or TV. I watched a couple of Godfather films back-to-back, and was done before we could start the third. Afterward, there's much less bodily soreness than with bone marrow, but you probably don't want to hit up the club that night.

If you think you want to get on the registry, but hip-hop's not your thing, locally, GenCure handles donor drives and recruitment for the NMDP. You can also learn more from any South Texas Blood and Tissue Center donor room.