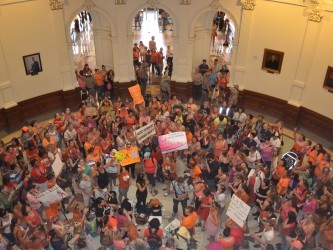 “Closing our clinics hurts us but more importantly it hurts the communities that we have served,” said Hagstrom Miller. “My heart goes out to those who will no longer be served safely or compassionately in these small, diverse rural areas of our state. We are so, so sorry to be forced to turn you away when you have relied on us to care for you.”

“For the women and families in Texas, justice has not been served. HB2 is an injustice to those in Texas seeking the legal right to end an unwanted pregnancy safely,” she continued.

The conservative-backed House Bill 2, signed into law by Republican Gov. Rick Perry, requires that doctors secure admitting privileges to a hospital within 30 miles of where the abortion procedure is performed— one of the primary factors for the recent clinic closure. Hagstrom Miller aimed criticism at not just the legislation itself but the medical community and doctors who failed to step up to aid the abortion clinics in dire straits. (“These medical professionals who know us and our work could have helped us to keep our clinics open, yet they have remained silent.”)

According to the most recent data available from the state health department, some 70,000 thousand women in Texas underwent an abortion in 2011; of those, 2,634 were performed in the RGV and 914 in the Beaumont area. Without the clinics, women living in Beaumont seeking an abortion must now travel at least 90 minutes to Houston to obtain the procedure or drive three hours to Baton Rouge, Louisiana. Women residing in McAllen will be forced to make a two to four hour trek to either Corpus Christi or San Antonio.

And of course, that is if these Rio Grande Valley patients—who live in not only one of the poorest areas in the state but in the country—overcome the many potential barriers to access, including transportation and costs associated with childcare and time off work or school.

Drawing from his own team’s research, Dr. Daniel Grossman, of Ibis Reproductive Health, and co-principal investigator with the Texas Policy Evaluation Project —a multi-year study that tracks the impact of the legislative cuts to reproductive health care— drew attention to the already beleaguered and devastated health network in East Texas and the Rio Grande Valley. Following deep slashes to family planning in 2011, Beaumont saw a 50 percent cut in reproductive health funding while the Valley lost roughly two-thirds of its funding, leading to longer wait times for appointments, minimized clinic hours, full-on clinic closures and drastic reductions in contraceptive services, which in turn, he says, “inevitably” leads to increases in unplanned pregnancy and thus, demand for abortion.

Too many women have been forced to delay their abortion weeks or even as much as a month while waiting for an opening at a clinic or have been forced to carry unwanted pregnancies to term, said health advocates. They expect that the number of women who self-induce without medical care will rise even beyond the “alarming” rate.

“The most concerning public health impact of these clinic closures is the rise of unsafe or self-induced abortion— especially in the Valley,” said Grossman, pointing to the 2012 TxPEP survey of six cities across Texas that found seven percent of women reported taking a pill or doing something to end their pregnancy on their own, sans professional medical care. Those numbers were even higher in border cities like McAllen, where 12 percent of patients said they tried self-induction.

A total of 19 clinics have shuttered since the law was enacted in November, estimated Hagstrom Miller, and 24 clinics remain. The number of open clinics has been nearly cut in half since 2011.

“Thousands of women will be denied local access to safe and professional abortion care for the first time since Roe v Wade. For far too many people abortion continues to be legal in the state but in reality, it is simply out of reach,” said Hagstrom-Miller.

When legislators who championed the law claimed it was meant to help the health and safety of women, “they lied," said the reproductive health leader, and today's closures are proof.

“They lied when they introduced the bill and it was obvious that the intention wasn’t to safeguard women’s health, but to close nearly every abortion provider in the state [

] At every step of the way the legislators lied and now we see the truth.”

The news follows the expected closure of Harlingen's Reproductive Services abortion center, which recently closed its doors, as well. The Current wrote about the RGV clinic's struggle to stay afloat in our Aug. 14 cover story. The McAllen closure officially marks the end of abortion services in the Valley.

Whole Woman's Health plans to host a vigil at the McAllen center at 5:30 p.m.