In Immigration Debate With Mayor Castro, Patrick Sticks To Politics

April 15, 2014 at 11:57 PM
comment
After weeks of feuding over social media, San Antonio Mayor Julián Castro and state Senator Dan Patrick (R-Houston) finally met face-to-face in the Univision television studios to duke it out over immigration. The much-anticipated Tuesday evening debate, meant to be a refreshing departure from ideological posturing and an exchange focusing on policy rather than politics, devolved into a spattering of right-wing hot button issues and inflammatory rhetoric from Patrick, seemingly unable to detach from the red meat that has helped him politically ascend.

From the get-go, Patrick— who has made his extremist anti-immigration views a hallmark of his campaign for lieutenant governor—declared he wanted to steer clear of politics, but that didn’t last long. Patrick (the author of Texas abortion restrictive legislation) managed to wrangle abortion rights into the debate about immigration by connecting the values of Latino voters to his own.

“If a mom comes across the border pregnant, I want her to have that child. I want her to have that Hispanic child. You believe she has a right to take that baby and I want to protect that baby, because we are all born in the image of God,” said Patrick. (And in a move that angered immigration rights advocates, Patrick dropped a reference to “anchor babies”— children born in the U.S. to undocumented mothers.)

Patrick railed on Democrats for not accepting "pro-life" candidates and for not getting behind the "sanctity of marriage" (aka for supporting marriage equality). “People who are pro-life have no room in your party. They're not allowed,” said Patrick to Castro. He took a swipe at state Sen. Wendy Davis for her pro-choice views and he asked Castro about his stance on abortion. He bashed the “liberal media.” At one point he said Democrats fear him. (To which Castro, referring to the impact of Patrick’s political extremism on some moderate Republicans, shot back, “Actually, you’re our meal ticket back in.”)

When the conversation, lightly moderated by the Texas Tribune’s Evan Smith, swung back to immigration Patrick said he was in agreement with a guest worker program but opposed to citizenship after 13 years and stressed he isn’t a “radical” and he isn’t “anti-immigrant.” Patrick defended his opposition to the DREAM Act by calling it a matter of “fairness” and limited resources, "It's about standing up for American citizens first,” he said. And in jarring show of compassion, Patrick touted his record of helping minority youth by pointing to millions raised for “black and brown” inner-city kids. (Is brown an ethnicity? A race? A Crayola?)

Fierce and on his game, Castro didn’t shy away from taking off the gloves.

“You're not about fixing the problem, you're about demagoguing to get more votes,” he told Patrick.

In a subtle shot at Patrick’s reference to the “illegal invasion” from Mexico, Castro warned the local Fiesta party festivities didn’t mean Texas had been invaded by Mexico. With all the new Twitter followers amid the social media squabble, it looked like Patrick owed Castro some gratitude, said the mayor. (The zingers abounded.) And while Patrick talked a big game in his TV ads, on the campaign trail and at the Alamo, where he verbally slugged Castro, the SA official criticized Patrick for downplaying his anti-immigrant views, before an audience in Castro’s home turf. 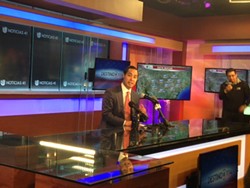 Castro addresses the press after the Patrick showdown. Photo by Mary Tuma

“You’ve been huffing and puffing on the campaign trail like the big bad wolf but now you are tiptoeing around like Little Red Riding Hood,” said Castro, later replacing the dainty storybook character with Cinderella. (That’s gotta sting.)

But more tellingly— aside from the incendiary rhetoric, perhaps forever ingrained in the conservative talk radio host—Patrick revealed a superficial, shallow knowledge of immigration policy, at least according to Castro.

When asked about the specifics of Congressional comprehensive immigration reform legislation (stalled by the GOP) during the debate, Patrick faltered and Castro quickly gave up, noticeably frustrated, tasking Patrick to first actually read the bill then come back to the table. In a media question and answer session following the debate, Castro drove the (larger) point home:

“He clearly did not understand the provisions of [U.S.] Senate Bill 744 and House [Resolution] 15 [Border Security, Economic Opportunity, and Immigration Modernization Act],” he said.

“And this is a man who wants to be lieutenant governor—the most powerful, most significant position in the state of Texas [

] Texas can do better than this, Democrat or Republican.”

If you missed the epic showdown, you can watch it here via Texas Tribune: