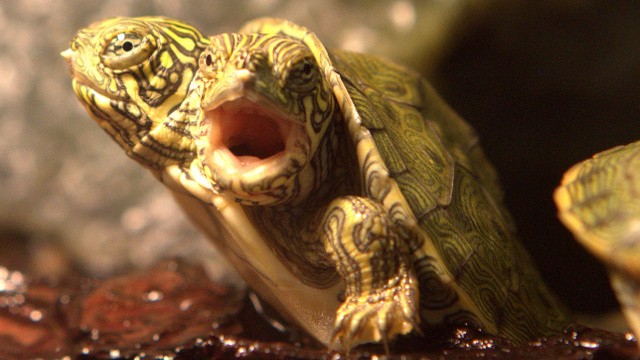 Remember Thelma and Louise, the two-headed turtle, who was born at the San Antonio Zoo & Aquarium last year? On June 18, this turtle is turning one year old.

For those unaware, Thelma and Louise are known as a Bicephalic animal (no, it’s not what you think). This condition occurs when twins do not separate, and the animal winds up with two or more heads. The occurrence is notable, but common enough in the animal kingdom.

Still, this adorable turtle became quite an internet sensation. Not only did she receive coverage from the likes of Buzzfeed and Animal Planet, she also got her own Facebook page.

It doesn’t look like the fame has gone to her heads, though. She spent this last year basking under a heat lamp and swimming in an aquarium, says Debbie Rios-Vanskike, a spokesperson for the zoo.

Likewise, birthday festivities are low-key and kid-friendly. From 10:00 a.m. – 2:00 p.m., kids can come by and visit Thelma and Louise, pick up a coloring sheet, decorate it and put it up for display. Special Thelma and Louise commemorative gifts will be on sale too.

This celebration will be one of many for this famous Texas cooter. After all, this species of turtle can live up to 40 years.