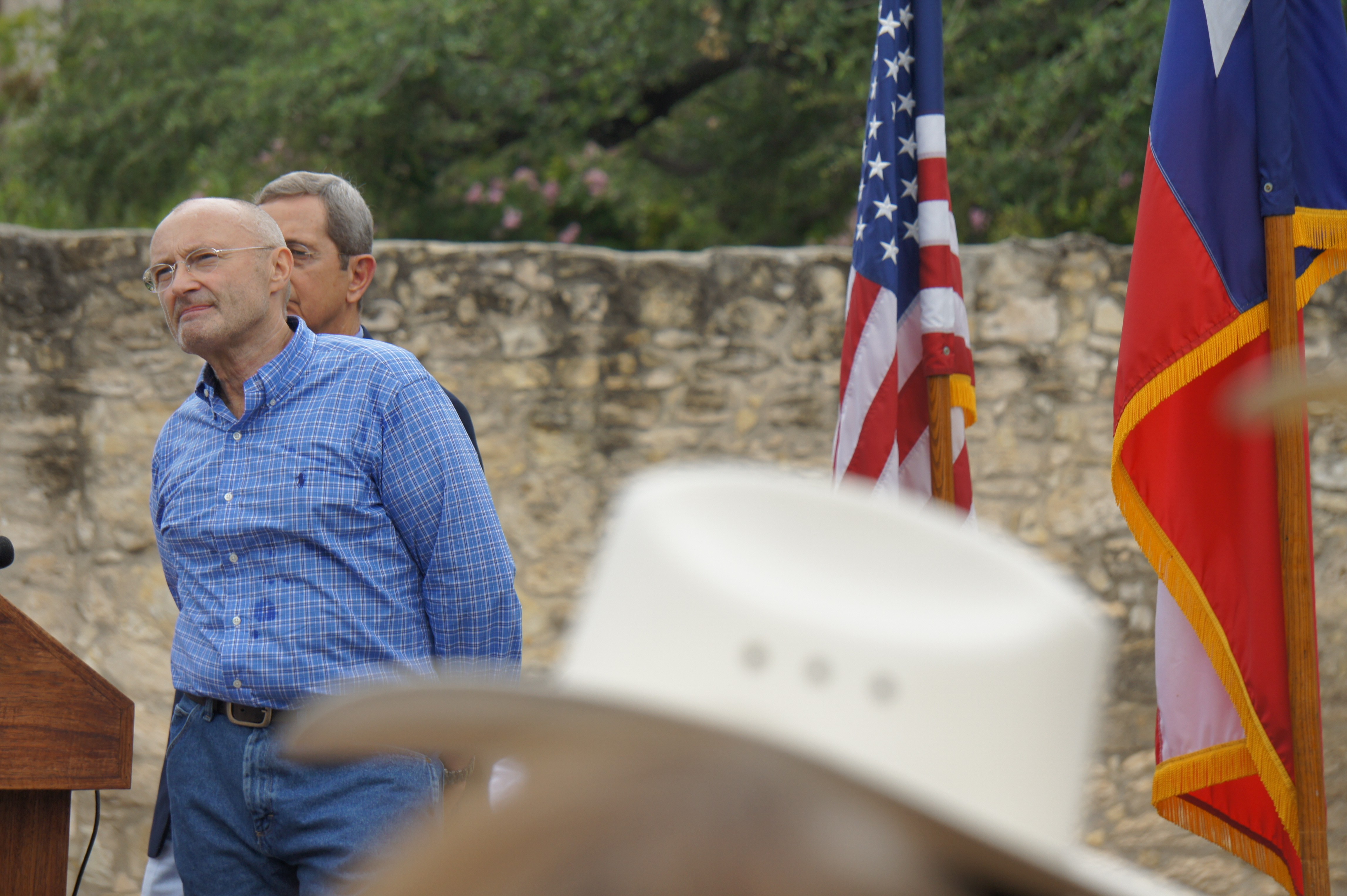 Phil Collins, the world’s most avid rememberer of the Alamo, made it official this morning. The former Genesis vocalist and drummer (and honorary Texan) expressed his intention to donate his extensive private collection of artifacts from the Battle of the Alamo and the Texas Revolution. Dozens of tourists and locals gathered in front of the storied mission to witness him make the formal declaration.

“I’m enormously pleased and proud to have my collection ‘going home’ to the Alamo,” he said.

[Photos from Phil Collins Announcing His Alamo Gift to Texas]

Collins will donate his entire collection of relics and artifacts to the Texas General Land Office, the entity that took over custodianship of the Alamo from the Daughters of the Republic of Texas in 2012. Included among the over 200 pieces of memorabilia is the legendary Bowie knife, a rifle once owned by Davy Crockett, uniforms, musket balls, letters from William B. Travis, as well as hundreds of other rare historical documents. The entire collection is estimated to be worth over $10 million, but Collins was reticent to state an exact dollar figure.

“Being British, we don’t talk about that kind of thing. It’s a valuable collection,” Collins said, schooling the audience in the art of British understatement.

The size of Collins’ Alamo collection may be indicative of rock star excess, but he insists he happened to amass so many Texas relics simply by circumstance. He doesn’t find the memorabilia; it finds him.

“I’m kind of a bit of a magnet now for things related to the Texas Revolution,” he said.

Formal documents that outline the transfer of ownership have yet to be signed, but a sort of gentleman’s agreement was reached between the prolific musician and Texas Land Commissioner Jerry Patterson. Transport of the artifacts from Collins’ home in Switzerland to Texas is expected to be completed by October. Collins pledged to personally oversee the packing of the historical pieces and to pay for their shipping.

Collins made it clear that he still intends to continuing purchasing Alamo and Texas memorabilia, but he promised to donate any new pieces to the General Land Office after he’s had time to enjoy them.

The collection is too large to be displayed all at once in the Alamo’s current facilities, but the acquisition of Collins’ trove of Texas treasures will bolster fundraising efforts.

“This is the mother of all Alamo collections,” Patterson said. “It needs a world-class facility to be stored and displayed in — under archival standards — so future generations can be inspired by it.”

During the announcement, Patterson expressed his wishes to expand the footprint of the Alamo by extending the reach of the grounds to their historical 1836 borders. That means vacating Ripley’s Believe It or Not and the other tourist attractions that border Alamo Plaza, as well as transferring ownership of those buildings from the City of San Antonio.

For now, the state of Texas can celebrate the generous gift, but there may be another Battle of the Alamo in the near future.