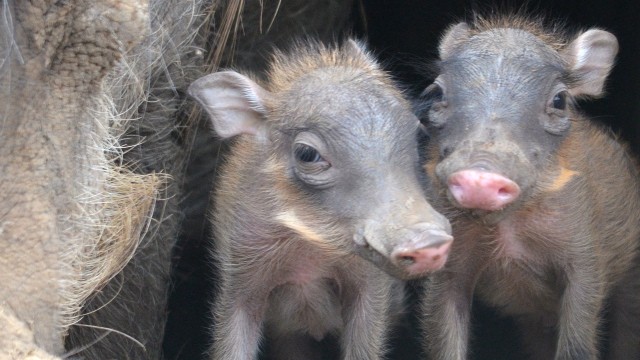 After a 172-day pregnancy, warthogs Sekini and Nikki now enjoy the pitter-patter of hoofed feet from their pair of adorable warthog newborns.

Melanie Lough, Senior Zoo Keeper, tells the Current that these babies are developing wonderfully. Eight hours after they were born, they started walking. Two weeks later, they doubled in size. In 18 months, they will be fully grown.

According to National Geographic, Warthogs are the wilder member of the pig family who natively live in the savanna and woodland areas in sub-Saharan Africa. Piglets will generally suckle for four months before moving onto a solid vegetarian diet.

Right now, these babies weigh three pounds apiece, but fully-grown adults weigh between 100 to 300 pounds, with the males outweighing females.

These days, this brother and sister pair spends their time frolicking around Mom, nursing, playing, and sleeping. The babies never leave Sekini side either.

In fact, Sekini has become quite protective of her babies. In turn, zoo staff serves her meals from the upper landing rather than through the side door near the exhibit. As the babies get older, they will resume regular feeding methods. Unless there’s a medically necessary reason to interfere, zoo staff is completely hands off when it comes to rearing these warthog babies, says Lough.

Male warthogs can sometimes behave aggressively, even towards their own young, says Lough. As an extra precaution, their father, Nikki, hangs out in his own warthog-man-cave next door.

To date, Sekini and Nikki have had three children.