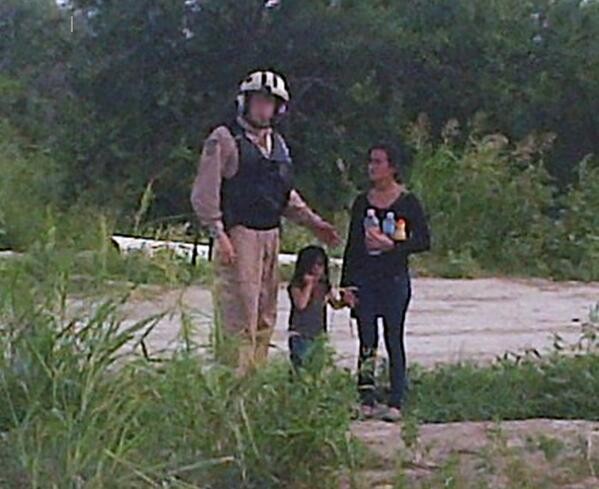 This photo posted to Twitter by @CBPSouthTexas shows two Honduran girls aged 3 and 18 being rescued after they crossed the Rio Grande and got dehydrated and lost. Courtesy Photo

A temporary shelter that houses undocumented children at Lackland Air Force Base will wind down operations in two to eight weeks.

“We’ve been told there are no pending children at Lackland and that it could be offline in 10 days to two weeks,” Ryan said.

In addition to Lackland Air Force Base, temporary shelters were also set up at Fort Sill Army Base (Oklahoma) and Naval Base Ventura County – Port Hueneme (California). The three facilities, which housed 7,700 children since opening in May, will suspend the temporary facilities.

However, U.S. Department of Health and Human Services Administration for Children and Families Office of Public Affairs Deputy Director Kenneth J. Wolfe said officials will continue to look forward because of substantial uncertainty about “future flows of unaccompanied children.”

Wolfe said the temporary shelters closed because officials have seen a decrease in children crossing the border in recent weeks.

“In order to balance managing costs with limited available resources and remaining prepared for sudden increases in the number of children needing care, HHS’s Administration for Children and Families plans to continue caring for unaccompanied children through a combination of standard shelters and surge capacity shelters,” Wolfe said. “In the near-term, the three temporary shelters on military bases could be re-opened for a limited time if the number of children increases significantly.”