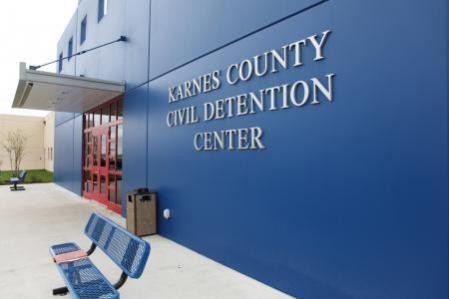 According to ICE, the facility will accommodate 2,400 women and children and will open in November.

Advocates and immigration lawyers are concerned about the Obama administration’s mass-detention policies implemented since this summer’s influx of unaccompanied minors crossing into the United States and fleeing persecution and violence in their home countries.

A center in Karnes County, about 50 miles south of San Antonio, was converted from an all-adult male center to a family detention facility about six weeks ago, and advocates say just four families have been released since then. The 532-bed facility is almost at full capacity, with 302 detainees being children as of last week, advocates reported.

“Family detention and this administration’s response to the increase in families fleeing domestic violence or other abuse in their home countries is inappropriate,” said Katharina Obser with the Women’s Refugee Commission, who toured the Karnes facility last week with dozens of other non-governmental organizations. “There is inadequate access to legal information and counsel at these facilities."

The new mass-detention center in Dilley is just the latest example of immigration officials using vulnerable women and children to send a message and deter others from migrating to the United States.

“These facilities will help ensure more timely and effective removals that comply with our legal and international obligations, while deterring others from taking the dangerous journey and illegally crossing into the United States,” the ICE press release said.

Human rights and immigration advocates have seen the harm caused by family detention before. After reports of abuse and neglect were revealed by the American Civil Liberties Union and the UT Immigration Law Clinic at the T. Don Hutto family detention facility north of Austin, the administration stopped detaining families there in 2009. According to the Texas Observer, the Dilley facility will be owned by the same private company that owned Hutto: Corrections Corporation of America.

“Given the shameful history of family detention at Hutto, it's horrifying that ICE would turn back to Corrections Corporation of America to operate what would be by far the nation's largest family detention center," said Bob Libal with the Austin-based Grassroots Leadership organization. “While little kids and their families will suffer in remote private prisons, far away from legal or social services, these multi-billion dollar private prison companies stand to make enormous profits."

The Texas Observer also reported that the facility will open on property owned by San Antonio-based real estate firm Koontz-McCombs.

Immigration lawyers and advocates say women and children pose little threat to public safety and would be better served if they were given the opportunity to live with a relative or family friend pending court proceedings. Advocates have heard from women detained both at Karnes and at a similar facility in Artesia, New Mexico,  that they are being separated from their children, that their children are losing weight, and they can’t properly access legal assistance.

“No matter what the dressing of the family detention center, there is no way to do family detention the right way,” Adriana Pinon with the ACLU said last week after touring Karnes. “All of these difficulties compound the traumatic experiences women and children have already endured to get to where they are.”

Last week, more than 120 national, state, and local organizations sent a letter to the Obama administration calling for an end to family detention. You can read the full letter here, via the National Immigrant Justice Center.