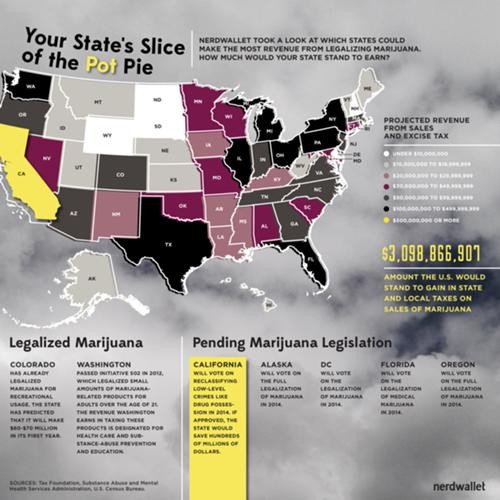 If the Lone Star State legalized weed, how much revenue would the famously free mark state draw into its coffers?

According to NerdWallet, a number crunching financial website, Texas, conservatively, would earn a little more than $166 million as the fourth largest potential marijuana market in the United States.

Colorado and Washington already legalized pot and this year, Colorado is estimated make $60 to $70 million in tax revenues from recreational marijuana sales.

And in November, Washington D.C., Florida, Oregon and Alaska all have marijuana initiatives on the ballot.

Unlike a decade ago, when war-on-drugs rhetoric was the holy book for public conversation, the idea of legalizing weed for recreational purposes, much less medical reasons, was taboo and only a fantasy to pot advocates.

But that’s changed, even in conservative Texas.

Jamie Balagia, also known as the “DWI” or “420” dude, who is running for attorney general, is using the race as a bully pulpit to rally people around marijuana activism.

Teresa Cleghorn, chairwoman of the Republican Liberty Caucus, a republican organization, has said one of the caucus’ missions is to advocate for the legalization of marijuana for recreational and medicinal purposes. Even more so, medicinal marijuana was debated at the Republican Convention in Dallas earlier this year after  a minority of republicans tried to get marijuana language onto the party’s platform for the 2015 legislative session.

And the Marijuana Policy Project, veterans of the marijuana lobbying front, made Texas a priority for its efforts.

Aside from the hypocrisy of alcohol regulation juxtaposed to marijuana prohibition, more and more diverse groups of people are starting to talk more and more about the green—and we’re not referring to marijuana.

If the weed debate doesn’t light up the Texas Legislature this year, it’s only a matter of time before dollar signs open up Lone Star State politicians who wouldn’t listen to other arguments for legalizing marijuana for recreational and medicinal uses.