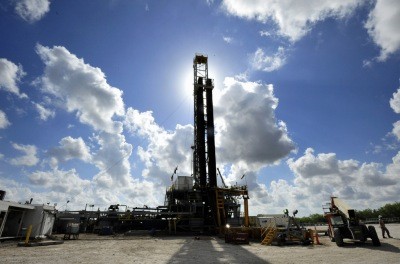 Photo: Scott Tower/Flickr A recent study conducted by University of Texas at San Antonio’s Institute for Economic Development determined that the Eagle Ford Shale—an ancient sedimentary rock formation that underlies much of South Texas—generated a whopping $87 billion during the production of oil and natural gas last year. Additionally, the Shale supported an estimated 155,000 full-time jobs and provided more than $4.4 billion to local and state governments. The study also anticipated that oil and natural gas will yield an astounding $137 billion for Texas by 2023. These findings comprise the Institute’s fourth study on the economic impact of the Shale, which spans over 21 counties that are directly and indirectly involved in fossil fuel production. “Shale oil and gas development is in the process of literally transforming global markets and local economies at the same time,” explained research director Tom Tunstall, PhD., who spoke about shale oil production in South Texas at last year's TEDxSanAntonio. “The United States now produces more oil than it imports for the first time since 1995, and Texas produces more oil than it has in 30 years. A big part of that has to do with what’s going on in South Texas in the Eagle Ford Shale.” This incredible production activity in South Texas specifically entails the unconventional extraction technique utilized at the Eagle Ford Shale, hydraulic fracturing. Hydraulic fracturing—or fracking—is the process of drilling and injecting fluid into the ground at a high pressure, fracturing shale rocks to release natural gas. Hydraulic fracturing allows drillers to penetrate the Shale directly, as opposed to seeking pools of oil and gas that have seeped out of source rocks; this ability has boosted productivity immensely and boasts the potential to alter the geopolitical landscape of the oil and gas industry. But, despite the favorable prospects offered by hydraulic fracturing, its benefits risk certain environmental dangers. Critics purport that during the extraction process, methane gas and toxic chemicals leach out from the system and contaminate nearby ground water. There have been over 1,000 documented cases of water contamination in close proximity to hydraulic fracturing sites. So the question remains, does the cost outweigh the benefits for South Texas?