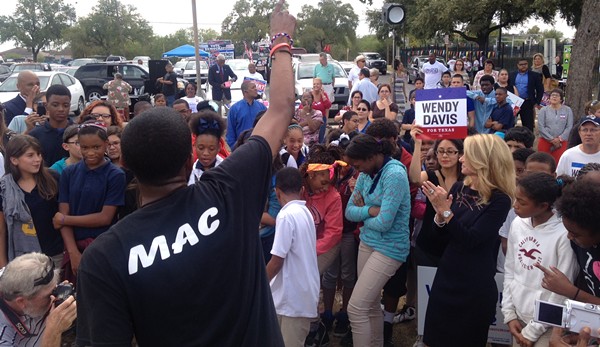 At the Claude Black Center in east San Antonio, Democratic gubernatorial candidate Wendy Davis made her second stop in the Alamo City in less than 24 hours and appeared alongside Bexar County Commissioner Precinct 4 candidate Tommy Calvert to urge voters to get out and make their voices heard.

Davis, who is trailing her Republican opponent Greg Abbott in the polls, promised the crowd of 100 or so supporters that she would fight for equal pay for women, health care access for the uninsured and raising the minimum wage should she be elected to the state's highest office.

"We're here to make sure and remind you about the importance of early voting," she said. "This week is our week."

Since early voting began last Monday, more than 114,000 Bexar County registered voters have cast a ballot, with more than 18,000 of those being mail-in ballots. The Claude Black Center, an east San Antonio early voting location, has seen more than 1,400 early voters come through its doors so far, according to the Bexar County Elections Department.

The number of registered voters in Texas and in Bexar County this election cycle tops total registration during the 2010 midterms and 2012 presidential election.

Davis' campaign has been criss-crossing the state since early voting began on October 20. On Tuesday, she paused to take photos with supporters, kissed cheeks and thanked local block-walkers for their voter outreach efforts. U.S. Rep. Lloyd Doggett, whose congressional district includes parts of San Antonio, made a cameo appearance at the rally as well.

Calvert, who if elected would be the first African American to serve on the Bexar County Commissioner's Court, vowed to hire neighborhood residents for local infrastructure improvement projects and said he would work to address the high school dropout rate among African American and Latino students. Calvert is running against Republican challenger Timothy Wilson.

But perhaps the best part of the community rally was after Davis' and Calvert's remarks were over. A local music group known as Real Musiq posted up outside the Claude Black center and began freestyle rapping for the crowd, which included students from the nearby George Gervin Academy.

"It's gonna take you and me to put unity back in the community," the young musicians sang for the crowd. "I just wanna change the world."

Davis wriggled her way through the small sea of people and ended up dancing with students and supporters as the group sang her name.