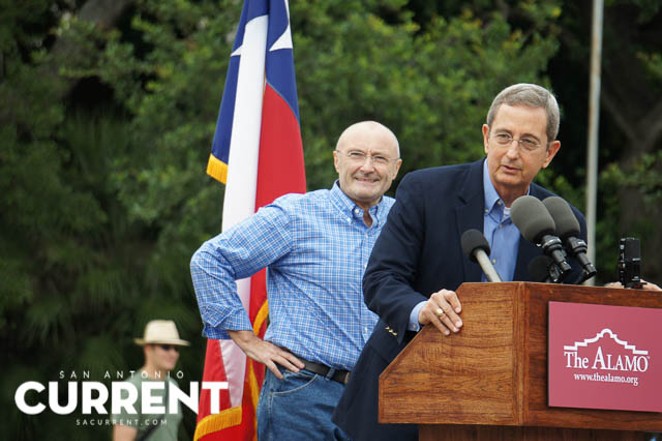 On Tuesday of this week, British pop-rock icon Phil Collins gifted a massive chunk of his lifelong collection of Alamo relicts and rarities—the largest collection of its kind to be amassed by a private collector—back to the site the fateful battle.

Currently housed in the Gallagher House on E. Houston Street, the artifacts will one day be displayed in a $100,000 center built exclusively for the “Phil Collins Alamo Collection,” which is now under construction.

The occasion marks the first return of many items—including Jim Bowie’s legendary knife and a fringed leather pouch carried by frontiersman David Crockett—since the disastrous fall of the Alamo in 1836.

“Texans are deeply indebted to Phil Collins,” Texas Land Commissioner Jerry Patterson stated in a media advisory. “He is giving us back our heritage. Now these Texas treasures need a home where all can see them and study from them and learn about how Texans won our liberty.”

In June during his public announcement, Collins revealed that his childhood memories of the Disney miniseries Davy Crockett originally sparked his interest in Battle for the Alamo.

“To me, these items aren’t just about a battle,” he explained. “They are about the idea of these men and women having a choice and staying to fight for what they believed to be just and right. That’s what makes these things special.

The Daily Phil Collins The Alamo